I’d hoped to get to this before work, but time flies fastest just before work when you have a lot you want to do, and just at the end of work, when you have a lot you have to do before you leave. It’s Saturday, so it’s storytelling day. As ever, we’ve chosen a picture from Square America, and I’ve written a story about it, and I welcome yours, too. Here’s the picture. My story is after the jump, just before the recipe.

I made these blondies because we had nothing sweet to eat with our coffee in the morning. Horrors! And I made them because I had some coconut milk leftover from a savory sauce. They’re so easy to put together, and so tasty once you do. They’re very very soft, but they get a little chewier as they sit.

Here’s The Verlaines with Bird Dog.

END_OF_DOCUMENT_TOKEN_TO_BE_REPLACED 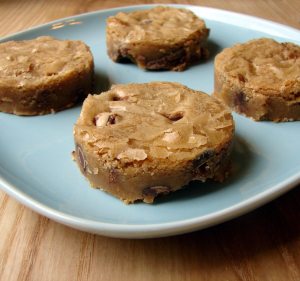 We, here at The Ordinary, ate too many brownies some time in midwinter. As we lay with a glazed look in our eyes and crumbs on our bellies, we said, “I’m never eating brownies again.” Oh, I know, we’ve all said it, after a rough bout of brownie eating. But this time we meant it. Cakes and cookies and tarts? Sure. But no brownies. Fortunately, we didn’t say anything about blondies! So here we go! I had a half a can of sweetened condensed milk leftover from my almond quince cake. What a strange and magical substance sweetened condensed milk is. Who thought of it? How was it invented? Or was it discovered, like a rare and elusive natural phenomenon? For some reason it always makes me think of those 50s food ads from magazines, with the oddly fascinating coloration. The truth is, it’s a really nice taste. There’s something so comforting about the sweet, thick milkiness.

The result is complete deliciousness. I’ve never made a brownie or a blondie with a more crackly top. And the inside is delightfully chewy and fudgy.

Here’s Blondie with Atomic. Wouldn’t you like to be Deborah Harry, living in NYC when this came out?
END_OF_DOCUMENT_TOKEN_TO_BE_REPLACED

A few weeks ago I was reading about Indian sweetmeats, as one does, and I thought, “These would make great cakes!” Not that they weren’t perfect in their original forms, I’m sure, just that some of the flavor combinations, and some of the interesting techniques seemed so inspiring to me, so full of possibilities. One in particular, a kind of fudge, with cardamom and coconut, became stuck in my craw as a perfect combination. Time passed, and the combination of cardamom and coconut haunted me…but I really felt that I wanted to make something with a different texture – not light and crumbly like a cake, but dense and tender, like the fudge that had inspired me. And then the whole thing with the brownies happened (I made 2 trays in 2 days…) And then it hit me!! These should be brownies!! But really blondies, because they wouldn’t have any cocoa in them! And they should have white chocolate chips, because brownies are required to have chocolate chips, but I liked the idea of all the wintery white colors in these. Before the last brownie was eaten, I got to work. And, let me tell you, these are the most ridiculously tasty, tender inside, crispy outside blondies I have ever eaten!!