I suppose this is the first stop on the super bodega express. I had thought about making this series well-planned and carefully organized. It’s not going to be that way. It’s going to be how I actually travel – vague and meandering. Wandering. The exciting thing about food, for me, is that one thing leads to another – one flavor makes you think of another, and combining them sends you off in different directions entirely!

I bought some guava paste at the Super Tropical Food Market. I’m very taken with it! I’ll tell you why. I’d read that when the Portuguese had trouble finding quince in Brazil, with which to make their membrillo, they fixed upon guava instead, as an acceptable substitute. I love quince paste! And I’m fascinated by the way foods changed as people moved throughout the world, according to the ingredients available and their needs at the time. That’s partly why I’m so intrigued by savory pastries, after all. And guava paste is lovely. It’s glowing and rosy and pretty, and I can think of a million ways to cook with it! 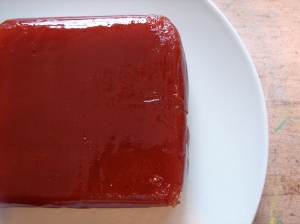 Let’s start with these cookies! First of all, they’re not officially alfajores, they’re just my odd version of them. It all started when we watched a beautiful Uraguayan movie called Gigante. It made me curious about Uruguayan food, of course! And I read about a pastry that combines quince, dulce de leche and chocolate. Which sounds perfect, doesn’t it? And then I read about this cookies – alfajores, which are thin shortbread discs, connected with dulce de leche and enrobed in white or dark chocolate. Well! I had to make some! The description reminded me of the empire biscuits that my scottish mother-in-law makes, so I adapted her recipe for the cookie part – adding a bit of cinnamon and vanilla, because I thought they’d be nice with the guava paste and the dulce de leche. And then when I found the guava paste at the good old super tropical, I knew that would be in there as well. I made them tiny, because they really do combine a lot of very sweet flavors, if you think about it! They’re almost like little candies. And they taste wonderful! Everything combines to some mysterious taste that’s much bigger than the sum of its parts.

I made the dulce de leche myself. (And very proud of myself I am, too!) I’ve always loved dulce de leche…it seems to combine elegance with the childish pleasures of warm milk and sticky caramel. I’ll include the recipe for that after the jump.

Here’s Carita de Alfajor by Fidel. I like the song a lot, but I don’t know what he’s saying. I should learn some languages!

For the dulce de leche

Combine the milk, sugar, salt and vanilla in a heavy sauce pan. Over medium heat, bring it to a simmer, and cook till the sugar is melted. Add the baking soda. Turn the heat down to medium-low, and cook for 3 hours, more or less. Stir from time to time, but don’t incorporate the lumpy bits that form on top – skim them off. Stir more often for the last half hour, because as it thickens, it will start to stick to the bottom and burn a bit, and you’ll have some pieces of that in your otherwise smooth confection. You can take it off any time after about 2 1/2 hours, and it will still be nice, just thinner and lighter-colored.

Cream the butter with the sugar and vanilla. Add the egg. Add the flour, salt and cinnamon. Stir well, and then work with your hands till it’s well blended and has formed a stiff dough. Roll into a ball, flatten slightly, wrap in foil or plastic and store it in the fridge for about half an hour.

Roll the dough to be about 1/4 inch thick. Using a sherry glass or cutter, cut small circles – about 1 inch wide. Put these on a lightly greased cookie sheet. You don’t need to leave much room – they don’t spread.

Cook at 350 for about 10 minutes, till they’re firm to the touch and just lightly brown on the bottom.

Remove to a cooling rack to cool completely

Cut off a chunk of guava jelly. Put it on a plate, and smush it down with a knife till it’s softened up a bit. Now spread a pea-sized amount on a cookie.

On another cookie dab a pea-sized amount of dulce de leche. Sandwich them together and set it aside. Don’t worry about spreading everything evenly, it will flatten itself out when you put the cookies together. And be careful not to press to hard and break the cookies, because then you have to eat them on the spot!!

For the chocolate – melt 1 cup of chips, any color, in a small saucepan over a larger saucepan that has boiling water in it. When it starts to soften, stir till it’s smooth.

Drop a cookie in the soft chocolate. Using a knife and a fork, roll it over, and try to scrape off some of the excess. Fish it out and put it on a cookie sheet covered in foil. When all the cookies are done, put the sheet in the fridge, and once they’re set, they should peel right off. I made this sound easy, but it’s actually a very messy job, and I’m not the neatest person, and I became quite coated myself, in the process. I think they look okay in the end, though, even if they are a bit wild!