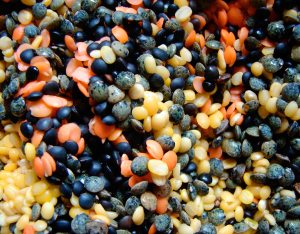 Here’s Blind Willie McTell with Amazing Grace. He doesn’t sing, but it’s almost as if the guitar is speaking the words.
END_OF_DOCUMENT_TOKEN_TO_BE_REPLACED 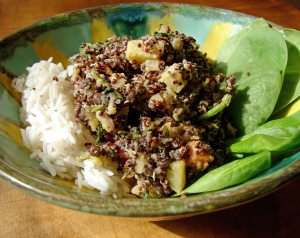 We ate quinoa a few times last week, and – as I promised the boys – we turned into Incan super heroes. (It is a “superfood,” you know!). Oh the adventures we had! I’d love to tell you about them, but I’m legally bound to silence, because they’re going to make an animated series based on our exploits. The animation will be a collaboration of Ray Harryhausen and Jules Bass, the music will be supplied by Damon Albarn and Harry Mancini, and Saul Bass is working on the credit sequence as we speak. Each episode will follow a set of normal, modern characters who will suddenly find themselves faced with a problem that only a family of Incan superheroes can solve. When our super powers wane, we eat mounds of quinoa to restore them. (Quinoa companies are currently duking it out for endorsement contracts) In one running gag, the littlest Incan super hero, based on Isaac, refuses to eat his quinoa, and the rest of us say, “We’ll have to go on our adventures without you!”

But let’s get back to the food, man. I remember when it was all about the food. I went to Whole Foods a few weeks back, and I stocked up on black grains. Black barley, black rice, black quinoa… (What, quinoa is not actually a grain, it’s a “pseudocereal”? Good god.) I like black grains and grain-like products because they’re very pretty, and because they usually have a nuttier, meatier taste than their paler cousins. Black quinoa is no exception. It stays a little crunchy, it turns a lovely garnet color, and the little pale squiggly spiral comes out to tell you that it’s done. I thought the quinoa would taste nice (and look good!) with beluga lentils. I wanted to try something a little different with the seasoning, because I feared I was getting stuck in a rut. So I opted for tarragon, fennel seed and ground coriander in a sauce made from white wine and orange juice. Fruity, citrus-tart/sweet, and anise-y! I thought it was nice! I thought it would go well with sweet potatoes and carrots, so I added some of those, too. And I threw in handfuls of baby spinach at the end, because everything is better with baby spinach! We ate it with basmati rice and a salad of arugula and more baby spinach. The rice is probably overkill with the quinoa, but it was one thing I was sure the boys would eat. I grated some sharp cheddar on mine, and I thought it was a nice addition.

We had some quinoa mixture left over, and some extra beluga lentils, so I decided to make them into burgers. I added a little smoked paprika and tamari, for that smoky, meaty edge. I added an egg and some bread crumbs, for substance, and I fried them in a little olive oil. Delicious! They’re a little delicate, but very tasty. I wanted to make rolls for my burgers, so I made some out of semolina. I wanted to keep them simple, but I kept thinking how nice the chinese dumplings we made were, with a little extra sugar, and a touch of vinegar, so I added that. The rolls were tasty, but quite dense. Which was a funny combination with the delicate burgers, but I liked it, although I concede that nice soft store-bought hamburger buns might make more sense in this instance. I heaped some lettuce and fresh spinach and fresh sliced tomato on, and I ate my whole burger! The boys ate them with barbecue sauce, and we made some oven roasted fries to go with them.

Here’s Talib Kweli & MF DOOM with Old School. It’s about cartoon superheroes, and it’s one of my favorites ever!
END_OF_DOCUMENT_TOKEN_TO_BE_REPLACED