We ate quinoa a few times last week, and – as I promised the boys – we turned into Incan super heroes. (It is a “superfood,” you know!). Oh the adventures we had! I’d love to tell you about them, but I’m legally bound to silence, because they’re going to make an animated series based on our exploits. The animation will be a collaboration of Ray Harryhausen and Jules Bass, the music will be supplied by Damon Albarn and Harry Mancini, and Saul Bass is working on the credit sequence as we speak. Each episode will follow a set of normal, modern characters who will suddenly find themselves faced with a problem that only a family of Incan superheroes can solve. When our super powers wane, we eat mounds of quinoa to restore them. (Quinoa companies are currently duking it out for endorsement contracts) In one running gag, the littlest Incan super hero, based on Isaac, refuses to eat his quinoa, and the rest of us say, “We’ll have to go on our adventures without you!”

But let’s get back to the food, man. I remember when it was all about the food. I went to Whole Foods a few weeks back, and I stocked up on black grains. Black barley, black rice, black quinoa… (What, quinoa is not actually a grain, it’s a “pseudocereal”? Good god.) I like black grains and grain-like products because they’re very pretty, and because they usually have a nuttier, meatier taste than their paler cousins. Black quinoa is no exception. It stays a little crunchy, it turns a lovely garnet color, and the little pale squiggly spiral comes out to tell you that it’s done. I thought the quinoa would taste nice (and look good!) with beluga lentils. I wanted to try something a little different with the seasoning, because I feared I was getting stuck in a rut. So I opted for tarragon, fennel seed and ground coriander in a sauce made from white wine and orange juice. Fruity, citrus-tart/sweet, and anise-y! I thought it was nice! I thought it would go well with sweet potatoes and carrots, so I added some of those, too. And I threw in handfuls of baby spinach at the end, because everything is better with baby spinach! We ate it with basmati rice and a salad of arugula and more baby spinach. The rice is probably overkill with the quinoa, but it was one thing I was sure the boys would eat. I grated some sharp cheddar on mine, and I thought it was a nice addition. 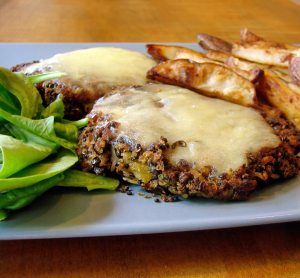 We had some quinoa mixture left over, and some extra beluga lentils, so I decided to make them into burgers. I added a little smoked paprika and tamari, for that smoky, meaty edge. I added an egg and some bread crumbs, for substance, and I fried them in a little olive oil. Delicious! They’re a little delicate, but very tasty. I wanted to make rolls for my burgers, so I made some out of semolina. I wanted to keep them simple, but I kept thinking how nice the chinese dumplings we made were, with a little extra sugar, and a touch of vinegar, so I added that. The rolls were tasty, but quite dense. Which was a funny combination with the delicate burgers, but I liked it, although I concede that nice soft store-bought hamburger buns might make more sense in this instance. I heaped some lettuce and fresh spinach and fresh sliced tomato on, and I ate my whole burger! The boys ate them with barbecue sauce, and we made some oven roasted fries to go with them.

Here’s Talib Kweli & MF DOOM with Old School. It’s about cartoon superheroes, and it’s one of my favorites ever!

COok the beluga lentils. In a medium-sized sauce pan over medium heat, warm the olive oil with the bay leaf and the herbs. Add the lentils, stir and cook for a minute or two and then add 4 cups water. Bring to a boil, then reduce heat and simmer until the lentils are soft, but al dente. 20-30 minutes should do it.

In a large frying pan over medium heat warm the olive oil. Add the shallot and when that starts to brown, add the garlic, fennel and thyme. When the garlic starts to brown, add the wine, orange juice, coriander and cayenne. Cook until the liquid is thick and syrupy. Then add the sweet potato and carrot. Cook a few minutes, stirring every once in a while. Add the quinoa. Stir to mix everything well, and cook until things start to get toasty and sizzly. Add water to cover and a teaspoon of salt. Bring to a boil, reduce heat and simmer until the quinoa is cooked. It will retain a little crunch, but the white spiraled center will come out, and that’s when you know it’s done. As everything cooks, use your spoon to smush the sweet potatoes a little, so that they almost become part of the sauce. Add more water as the pan dries out. When the potatoes and carrots are soft and the quinoa is cooked, add the spinach, and stir it in. Cook till it’s wilty but bright. Add the butter and balsamic, taste for salt and add plenty of pepper. Stir in about 1 1/2 cups of cooked lentils – save the rest for the burgers. Serve over basmati rice.

Mix everything together in a bowl. I processed the rice with the bread crumbs, so there wouldn’t be any discernible pieces of rice. Make into patties. Heat a layer of olive oil in a large frying pan, and cook the patties on both sides until brown and crispy. Add a piece of cheese at the end if you feel like it. The burgers are a little crumbly, so turn them carefully, and push them back together with your spatula as you go along. They shouldn’t stick to the pan, though. I kept mine warm in the toaster, and that helped to melt the cheese.

Combine the yeast, sugar and warm water. Let it sit for about five minutes, till foamy.

In a large bowl, combine the flours, salt and sugar. Make a well in the center and pour in the yeast mixture, the olive oil and the balsamic vinegar. Add enough warm water to make a workable dough (I think I added about 1/2 cup) Knead for seven minutes, or until soft and elastic. It will be a little firmer than regular dough.

Put in a lightly oiled bowl, cover with a damp cloth, and leave in a warm place for about two hours. Punch it down.

Leave it in a warm place for about 45 minutes. Punch it down and form it into six balls. Flatten the all, and then tuck the ends up under it to make it round again. Leave on a baking sheet while the oven preheats to 425.

Brush the tops with water and sprinkle some water on the bottom of the oven, and then put the buns in and close the door. Every five minutes or so, brush the tops with more water. Do this 3 or 4 times, then just leave them to cook until they’re golden brown on top, and sound hollow when you tap on them. About half an hour.