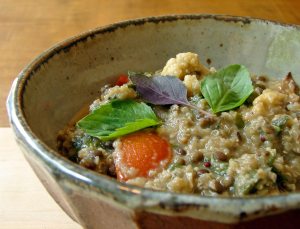 Here’s Blind Willie McTell with Amazing Grace. He doesn’t sing, but it’s almost as if the guitar is speaking the words.

Wash the quinoa in a fine sieve in several rinses of water. Rinse and drain all of the lentils.

Preheat the oven to 400. Toss the cauliflower with a little olive oil to lightly coat, spread in a single layer on a baking sheet, and roast for about 20 minutes, till it’s starting to get brown and crispy on the outside. Set it aside.

Meanwhile…Process the shallot, garlic and ginger until you have a rough & chunky paste. Warm the olive oil over medium heat in a medium-sized soup pan. Add the shallot-ginger paste and the bay leaf. Stir and cook until it starts to stick to the bottom and get a bit brown. Then add the quinoa and all of the lentils. Stir to coat, and cook till they start to sizzle. Add the coriander, paprika, and cayenne. Stir, and then add about 3 cups of water. Enough to cover with about 1/2 inch on top. Bring to a boil. Reduce heat and simmer till everything is cooked. The beluga lentils will take the longest – about 30 minutes. Everything else should be fully cooked and almost melted by then. You’ll probably need to add another cup or two of water as everything reduces and thickens.

Stir in the butter and balsamic.

Put half the roasted cauliflower in a processor. Add a few ladelfuls of broth from the lentils and process till smooth. Add this to the pot. Add the tomato and spinach, and stir till they’re warm and wilty.

Taste for salt and season with plenty of black pepper.

Wash and dry the basil, and cut it into thin ribbons. Stir into the stew just before you serve.