This week, Malcolm brought home a piece of light blue cardstock, folded in half. It contained little messages, scrawled in pencil every which way, some in boxes, some in circles, one in a heart – all little descriptions of Malcolm. “Cool & funny.” “You have a good sense of humor.” “A great treasure finder.” “You are a outside person.” “You are good at sports.” “Kind.” One even says “I love you,” but we’re not going to ask him about that! And one says, “Your [sic] weird and collect everything.” Honestly, I liked this one as much as any of the others. I’m proud that he’s weird. I’ve spoken in the past about the fact that I like strange people, and I’m glad to be strange myself. And about the fact that having children has made me see this, as all things, a little differently. I want life to be easy for them, I want them to get along with everybody, I don’t want them to be teased. I want them to be proud of the ways that they’re unique, but anybody who has been to high school knows how hard this can be. Sometimes, David and I are bewildered by the boys’ behavior, and we have that nagging fear that they’re too strange – that they’re disturbingly strange. Why are they rolling around on the floor wrapped up in blankets? Why does Malcolm say “pineapple” or “banana” so often, and why do both boys dissolve into laughter when he does? Of course the best cure for these doubts is to spend time with other children their age. They’re all crazy! And in pretty much the exact same ways! We’re all in it together. After all, next to little phrases on Malcolm’s card like, “Your are nice, smart, neat, teachest, and uses everything.” Some kid wrote “egg sandwitch,” and nothing else! Egg sandwitch!! It is fun to say. And Malcolm’s teachers have found many occasions to question his neatness and his handwriting, but, let me tell you, they all have the same handwriting, and the same sloppy spelling, and the same inability to keep everything on a straight line! I asked Malcolm who had written the comment that he was weird, and he named a girl (it is written in a heart!). I think it’s a compliment, and he seems so cheerful about it, about everything that was written. He has a small class of clever oddballs, and they’ve all known each other since they toddled around the town. I’ve been thinking a lot lately about community and conformity, the one I love the idea of, and the other I don’t like at all. I find it very moving to see people working together towards some common cause, it makes me weepy, at the most unexpected times! But I like to think about the people working together as each their own little bundle of eccentricities and strengths and weaknesses. This is why we need each other, and why we work well together as a community. At the very bottom of Malcolm’s blue paper, something is scrawled very lightly, and, to me, it’s completely illegible. I asked him what it says, and he said, “I think it says, ‘You are happy.'”

Speaking of weird! I’ve been musing about mince pies for some time now, this being the time of year that they’re mentioned very often. They befuddle me!! They’re sweet – they’re desserts (to the best of my knowledge), but they have beef drippings in them. Or something like that, I’m not completely sure. I’m fascinated by the intersection of sweet and savory. I like salty-sweet things, and I like an unexpected touch of sweetness in a savory dish, like raisins with greens, or guava paste in an empanada. Lately I’ve found myself drawn to the savory side. So I had the idea of making little mince pies, but making them savory, with black bean mince, which is something I invented all by myself!!! And then adding a few sweet touches, like parsnips, apples, raisins and clementine zest. I think they turned out quite good! The black beans, sage, shallots, and rosemary add depth, the smoked gouda and smoked paprika add…well, smokiness! The pecans add crunch, and the roasted parsnips and apples add a pleasant, not-overpowering sweetness. These were very good with mashed potatoes!! If you didn’t feel like making the crust, I think this would make a nice dressing or stuffing.

END_OF_DOCUMENT_TOKEN_TO_BE_REPLACED 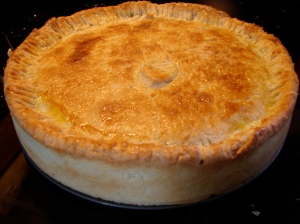 Happy thanksgiving, everybody! However it began, it’s become a holiday to celebrate being with people we love, and to celebrate having good food to eat and the opportunity to cook it together. Of course I love that idea! It’s a day to think about what it means to be grateful, and to concentrate on all of the things we have to be thankful for, which is something I wish I did more often. It seems like one of the least commercializable holidays – no toys or candies or cards. The things they’re pushing at you in the stores are ingredients for food that we can make together – bags of walnuts, cans of pumpkin purée, yams and turnips. Yeah.

So what am I making, you ask? I’m making a ginormous deep mushroom pie, that will be just as satisfying and delicious as turkey, I feel sure, for the vegetarians among us. And I’m making a herbed walnut “gravy.” I’ll let you know how that goes later on. And I’m making a stuffing of chestnuts, white beans, apples, shallots and sage. Recipe after the … jump!

Here’s a small playlist of songs of thanks and gratitude. Have a wonderful day, everybody!
END_OF_DOCUMENT_TOKEN_TO_BE_REPLACED