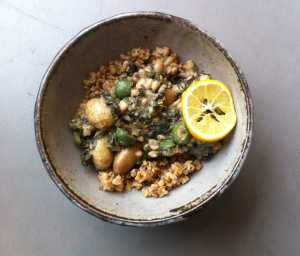 It’s a winter storm! It has a name, and I think it’s Janus, which is fitting, I suppose, this being January. Janus was the god of beginnings and change, of gates, doors, passages, journeys, endings, and time, the future and the past. But sitting here, looking out upon snow upon snow upon snow, I don’t feel inspired to start anything new, to embark on any journeys, to open any doors, be they real or metaphorical, and let the icy winds blow into my home. More arctic cold is predicted for the rest of the week. That’s right, it’s winter and we’re experiencing wintery weather. And everybody is talking about it, which is fine by me because I heartily approve of talking about the weather, I think it’s a weighty and important subject. But I also believe that if people have a problem with this weather, it’s because they made the wrong choice in being human. Obviously, they should have been dormice. I’m dormouse-obsessed at the moment. I saw a picture of a hibernating dormouse in Isaac’s magazine, and I’m completely enamored. Listen to this wisdom. They sleep all of winter and a good part of fall and spring. They don’t scurry around hoarding food, they just eat it! And get (relatively) plump! And then they curl up and sleep very soundly for months. Plus, they’re arboreal. They’re mice who live in trees. They have extravagant whiskers. They have bright dark eyes. They eat hazelnuts and berries. I want to eat hazelnuts and berries! They have little hands and feet and fluffy tails. They sleep so soundly that people can pick them up and record the sound of them snoring, which is apparently a thing that people do…

(look at his little hands and feet tremble!)

This is a juvenile dormouse in a torpid state.

If it’s snowing where you are, or raining, or the least bit cold, you should probably just stay inside and watch these BBC dormouse videos.

Or you could make this nice bright stew. It has tiny potatoes, but you could use larger potatoes and cut them up. It has small white beans, and white wine, and rosemary, thyme and sage. It has spinach and castelvetrano olives, and the juice of a meyer lemon. It’s nice in winter, because it’s savory and satisfying, but vivid and green and juicy as well. It would be nice in spring or summer with fresh new potatoes and baby spinach. I served it over a medley of wheat grains…bulgur, farro, and freekeh. I thought they were nice together because they each have a different texture. We had some goat cheese caper toasts, too, which I might tell you about another time.

Your song for today is this whistling dormouse.

END_OF_DOCUMENT_TOKEN_TO_BE_REPLACED 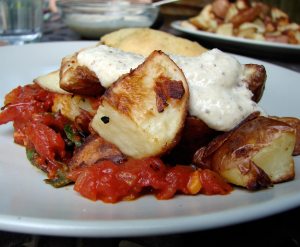 My friend Laura recently posted a picture of her son jumping into a swimming pool. He looks wonderfully happy, as boys do jumping into swimming pools. You can see his shadow on the water. He’s in the air! I love photographs like that – especially old, pre-digital photographs. How thrilling it would be to get your photos back from the lab, or develop them yourself, and find this impossible shot in which you’d captured someone that you love floating in the air. Your dog, leaping happily. Your child, jumping from one thing to another, so proud of their ability. Children love to be off the ground, between one thing and another, dizzyingly suspended between worlds – jumping on a bed, jumping into water, jumping from a tree branch. It feels like capturing an ecstatic moment. In Charles Burnett’s remarkable movie Killer of Sheep, there’s one beautiful scene that shows children jumping from rooftop to rooftop over head. The whole sequence is one of the most striking I’ve seen on film. And Mos Def used a still from the movie for the cover of The Ecstatic! It’s such a perfect picture for a perfect title for a perfect album that I can’t really add anything! 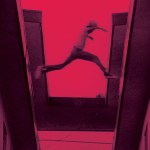 People and animals in mid-air! Photos that capture youth, and happiness, and motion – they catch time while it’s passing. 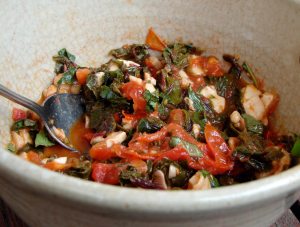 There’s something very summery about the photos, maybe because, like summer, they seem to last forever and they’re over in an instant. If a recipe can capture a moment of summer, and I like to think that it can, surely it would have tiny potatoes and tomatoes and basil! And here we have two very easy, very summery side dishes. One is straight out of the CSA box – beet greens, chard, green garlic, tomatoes, and tiny potatoes. Is there anything more pleasing than small potatoes, boiled whole, and tossed with butter and herbs, and seasoned with salt and plenty of pepper? We used tarragon, because it’s nice with potatoes and we have it growing in our garden. But you could use any mix of herbs you like. This is a good way to use up the beet greens when you make beet dogs. I used a mix of beet greens and chard (very pretty, both!) and made a quick summery sauce of fresh tomatoes, basil, and garlic. While it’s hot you toss it with boiled potatoes, little cubes of mozzarella and pine nuts. The heat from the greens melts the cheese, and it’s all very nice. The other dish is my version of the Spanish tapas dish patatas bravas, which is crispy potatoes over a spicy tomato sauce, topped with garlicky aioli. Ever since I made almond aioli, I’ve wanted to try it with this, and it turned out really good! I made a slow-cooked tomato sofrito as the base, and you can use fresh or canned tomatoes for this. 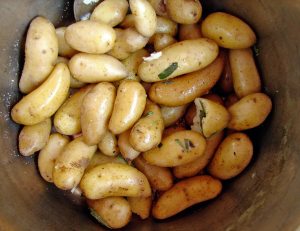