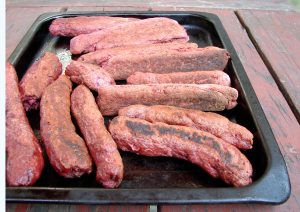 I love sleeping. I’m not very good at it – I never have been! I’ll wake up in the middle of the night and my brain will start buzzing, and I can’t quiet it down. It’s like the little people in my brain that have the middle-of-the night shift are working over time. I used to panic that if I didn’t get enough sleep I’d go crazy. I mean, there’s only so much of being with myself that I can take! I need a break, man! Of course, panicking about not being able to sleep is a rookie mistake; all the seasoned insomniacs know that it only makes things worse. Having children has put some sleepless fears to rest. I get along fine without much sleep. Yes I’ll be tired and blurry, but it won’t last forever. But a good night’s sleep, or even a good few-hours of sleep, is one of life’s greatest pleasures. I don’t consider this a lazy attitude, because with sleep comes dreams, and dreaming is one of the most active and creative activities that a mind can engage in. I love dreaming! Perhaps because I’m a filmmaker that hasn’t made a film in over a decade, I consider every dream like a short film – I’ve even have a dream that I make a film, and it’s always a perfect and beautiful film, which I lose when I wake up. David’s alarm goes off at 6, and I’ll sleep for another hour or so, and this is when you have all the best dreams – or at least you remember them best. Dreams about old clothes, dreams about flying, dreams about falling, dreams about houses that have unexpected rooms and passages, dreams about climbing trees, dreams about my dog, dreams about people I’ve never met, dreams of swimming, dreams of drowning, dreams about water, dreams about glass, dreams about darkness, dreams about school, and about schools with unexpected rooms and corridors. And lately, of course, dreams about food. This recipe came to me in a dream. And part of me, upon waking, thought, you’re not really going to try that, are you? And another part of me thought, why the hell not? These are a sort of version of vegetarian hot dogs. They’re made with beets, pinto beans, garlic, smoked paprika, a pinch of nutmeg, and a pinch of allspice. They have some flour and eggs in them. They’re very simple and easy to make. They look funny and a bit embarrassing while you’re making them, so if you have boys in your house I suggest you banish them from the kitchen, unless you’d like to hear rude jokes and titters. The jokes stopped when they tasted these, though! Everybody was dubious, but everybody loved them. We all ate more than we planned on. Isaac sat with his chair tilted back, one beet dog in each hand, talking and gesturing, and ate every single bite. (Being allowed to eat them with their hands was part of the appeal!) Malcolm declared them better than store-bought not-dogs. I tried them two ways. First, I just fried them in butter (which is the way I make not dogs.) Second, in a flash of inspiration, I had the idea to boil them first, like gnocchi (which they resemble in some ways!) and then fry them in butter. I thought these came out better. Less dry, with a nice sort of chewy texture. They really are unlike anything I’ve ever eaten, but in a good way. Try them! Why the hell not! They’re very easy to make. I think that the boiled ones would be grillable, too. I’ll try it and let you know!

Toss the beets with the olive oil and balsamic. Spread on a tray. Toast in the toaster oven or roast at 425 in the regular oven for about 25 minutes, till they’re starting to brown and caramelize.

Warm 1 T olive oil in a large frying pan over medium heat. Add the garlic, and heat, stirring till the garlic starts to brown. Add the beans. Stir to coat them with oil and garlic, let the pan dry – maybe 2 minutes, then take them off the heat. Add the spices and transfer to the blender or food processor. Add the beets and two eggs. Blend till fairly smooth. They can still have a bit of texture, but no big lumps.

Scrape into a bowl, and stir in the flour, baking powder, salt and lots and lots of pepper. Mix into a cohesive dough, and put the dough in the fridge to chill for about 1/2 an hour.

When you’re ready to cook, break off a ball of dough with floury hands, and roll it into a snake on a floury counter. Make it about the size and shape of a hotdog (or however big you like, but try not to make it too thick.) You can set them on a plate to wait to be cooked.

At this point you can use either of two methods. You can just fry them in butter in a large frying pan, turning them frequently so they don’t stick, and so they get brown on all sides. And then set them on a baking tray in a warm oven till you’re ready to eat.

Or…you can put a big pot of water on to boil – it only needs to be about 4 inches deep. Drop the hotdogs a few at a time, and let them cook for about a minute. Then fish them out and put them on paper towels to dry slightly, and then fry them in butter till they’re brown on all sides.