Yesterday Malcolm told me that my nickname is “dictionary.” I love it! I more than love it, I’ve decided that I want to be a superhero called “The Dictionary.” I wouldn’t be a snarky sort of superhero who went around telling people they used the wrong form of “their,” or they used “less” when they should have used “fewer.” First of all, that’s a job for the word police. Second of all, Lord knows I make plenty of mistakes myself. And finally, I believe that using words incorrectly and spelling them irregularly might be what keeps language alive and changing and growing. And naturally, as The Dictionary, I’d be like the OED. I wouldn’t tell people what words mean, but what they have meant and how people have used them differently over the centuries, how their meanings vary from year to year and place to place and usage to usage. I’d resolve conflicts by showing the combatants that their words have shades of meanings, and if they only shift their understanding slightly one way or another, everybody could get along. I’d show how “attack” can mean, “To enter upon a work of difficulty, with the intention of conquering and completing it.” So we can decide together that the work of difficulty will be an epic novel or an opera in twelve acts, and we’ll all attack it together. I’ll point out that “take” originally meant, “to put he hand on, to touch, to lay hands upon, to accept what is handed to one, or even to understand.” And it still means, “to take root, to germinate, and to begin to grow.” So we’d all marinate on those meanings for a while, and maybe plant a garden together and watch and wait for the seeds to take, and forget why we were fighting. Because, of course, we could all fight together…we could all fight disease or fight poverty or ignorance instead of each other. And I’d swoop down in classrooms and explain that “essay” means “to try,” and that the important thing is the attempt itself, the process. And before you know it everybody would be as delightfully bewildered by vagaries of meaning as I am, and everybody would agree that nothing is written in stone or immutable, and that everything is open to interpretation and we’d all be expressively unintelligible and unproductive.

I made some caramelized onions last summer and froze them for a wintery day. We’ve had a lot of those lately! I decided to put them on this pizza, which also has capers and black olives. And, it has white sweet potatoes mashed with ricotta cheese! White sweet potatoes have a mildly citrus-y flavor that I like a lot. This whole pizza was a mixture of sharp flavors and comforting textures, and I liked it a lot.

While Malcolm is away, Isaac gets to call all the shots. So we watched a show on dinosaurs. He likes these shows with men and women in denim shirts and floppy hats, leaning on their tanned knees and peering out over the desert. They tell us about dinosaur bones, and then we see very realistic animations of the dinosaurs who had those bones, trundling or scuttling around the prehistoric forests. Last night’s show was about the T-rex, who apparently had a bigger brain than anyone gave him credit for, but moved more slowly. Somewhere in the world (I’ll admit I wasn’t paying very close attention) a group of T-rex bones were found close to one another. Four whole dinosaurs! Why? Why exactly did they live and die so close to each other? According to the experts, it was probably a sign that they hunted in packs. “These shows always miss the obvious,” said our Isaac, with a sigh in his voice. “They’re always looking for attacking and fighting. What if the dinosaurs just wanted to be with each other?” They’re not hunting in packs, they’re making dinner together. They’re just sharing their food, and keeping each other warm. And in a second, in the twinkling of an eye, I saw that the whole history of man and beast has been approached from the wrong angle. Our history shouldn’t be told as a succession of wars and disasters and people tearing one another apart! It should be about people just wanting to be with each other. Take note, historians and anthropologists and archeologists. It’s just so obvious.

This pizza was very very tasty. I couldn’t resist buying some purple sweet potatoes, they’re just so pretty. So I sliced them thin and roasted them with olive oil, balsamic, rosemary and smoked paprika. Sort of like sweet potato pepperoni!! And then I decided to put them on a pizza with baby arugula and black olives. Sweet meets peppery meets salty. I put some of the arugula under the cheese, and I scattered some on top at the end. I used a mixture of sharp white cheddar and mozzarella, which I think was a good combination, but obviously you can use whatever you like. And that’s that.

Here’s Louis Armstrong singing Get Together (yes, that Get Together!!)
END_OF_DOCUMENT_TOKEN_TO_BE_REPLACED

Isaac’s second grade class was given an assignment. They were told to write a short essay about their favorite place to go. They made a list of places they like, chose one, and started in. Isaac chose his imagination. The teacher told us about this in a parent-teacher conference, and she was obviously delighted with his answer and of course I loved her for that. And of course I love Isaac’s answer. I can’t visit his imagination with him, but he’s drawn me pictures and told me stories–he’s sent me postcards. There’s never a dull moment. It’s an exciting place, a destination. Later on at Malcolm’s conference they told us what a good job he’s doing with the focussing and the paying attention and the being prepared. And then they said, but sometimes he’ll just be…gone…for a few minutes. Just staring into space, and he’ll look so happy and content. And I said, “Oh yes, didn’t you know? He can travel through time and space. He can close his eyes and be in a different world. Yeah, he told me all about it just the other day.” Heh heh! Of course I didn’t say that!! I didn’t want them to think I’m crazy! What’s cute and clever in a seven-year-old is cause for alarm in older children and their parents. But I’m proud of Malcolm’s world-to-world traveling abilities, and I’m so glad and grateful that both boys have this prodigious talent. I consider it a very solid and serious real-world skill. Just think what it means! They’ll never be bored! They’ll never be stuck in a dull place with nothing to do! It costs nothing, they can’t lose it but they can share it, and nobody can ever take it away from them. 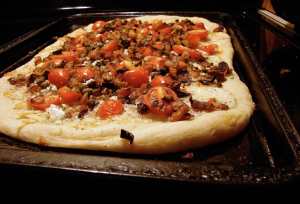 I thought this was a very delicious meal. It made me happy to make it and to eat it. It’s a pizza piled high with deliciousness. Sweet potatoes are diced quite fine and roasted with shallots and balsamic vinegar. They’re piled atop goat cheese and mozzarella and smoked gouda, and on top of that we have tomatoes and capers. Fresh and sweet and smoky and satisfying. Very autumnal.