I think I had a big stupid smile on my face the entire time we watched Melody. Why the big 103-minute idiot grin? It wasn’t because the movie is sweet, although it certainly is. Nor because it is a happy movie, although in many ways it’s that, too. It was because it just felt so perfect. Everything about it was exactly as it needed to be. I could imagine the filmmakers watching the dailies and brimming over with gladness that they’d captured the shots they’d captured, and then adding just the right soundtrack, editing it perfectly, and sitting in the dark, full of joy, watching the finished movie. It’s an odd film in many ways. It’s called Melody, and it tells the story of a sweet sort of romance between Daniel Lassiter and Melody Perkins, but it’s almost more focussed on Daniel’s friendship with the kind but unruly urchin Ornshaw. Daniel is a child of relative privilege and Ornshaw is not, and the film reminded me of Machucha in that their friendship seems unexpected and almost discouraged, because it crosses certain unwritten boundaries; boundaries that adults create between certain types of people, boundaries which make no sense to children, but which they learn to honor and fear. And although the film is exceedingly sweet, it’s never saccharine. It’s too real for that. Apparently it’s Alan Parker’s first film script, and it’s beautifully told. The story unfolds in small meaningful moments, just like real friendships, just like life. We see spells of loneliness, moments of connection, misunderstandings and disappointments. When Melody and Daniel first spend any time together, they don’t really talk at all. She plays Frere Jaques on her recorder, and he joins in on his cello. They don’t play particularly well, but it feels as though they’re happy to be talking to each other. Like everything else in the movie, it’s the messiness and imperfection that makes the scene so beautifully human. Nothing is over-told, or too carefully explained, and we feel like we’re just watching the world from Daniel’s point of view. The camera catches the expressions of the people around him, and though the adults are almost grotesque, often cruel, and never capable of the clarity of thought that the children achieve, we still feel a certain affection for all of them. But why must they complicate everything? Why can’t they see how it should be? And though the film is sweet, it’s also anarchic, almost surreally so towards the end, in a scene that reminded me of Vigo’s Zero for Conduct. I think part of the reason that Melody made me so happy is that I’d never heard of it before about a week ago. It’s been around since 1971, and I had no idea it existed. It feels like a discovery! I found it because I’ve been obsessed with Nina Simone’s version of the song In the Morning. It turns out the original is by the Bee Gees (the Bee Gees!) and is just part of the ridiculously addictive soundtrack to this film. I love all the songs! Who would have thought? I love it all! I wonder which other films are out there, waiting to be discovered? 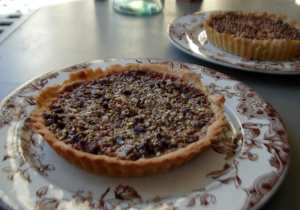 Here at The Ordinary, we call these tarts “Dormouse pies.” Because they contain dormice? Certainly not! Because they were inspired by the hazelnut and blackberry diet of a dormouse. They have a shortbread crust, a layer of jam, and a crunchy top layer of nuts and chocolate. I made two small tarts, one with blackberry jam, fresh ripe pears, hazelnuts and bittersweet chocolate and one with strawberry jam, almonds and bittersweet chocolate. They’re both very good. Very very, dangerously good. I made two 6 inch tarts, but you could easily make one 10 or 11 inch tart with these ingredients, I think.

Here’s To Love Somebody from Melody, and a passage from the movie demonstrating all the beauty, humor, and affection contained therein.
END_OF_DOCUMENT_TOKEN_TO_BE_REPLACED 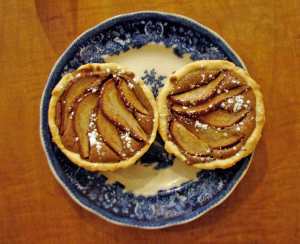 Snow Day! They cancelled school before it even started snowing today, but by the time the boys were out of bed the snow fell thick and fast, and it’s still coming down. We trudged around our pretty town in the slush, the boys sledded a few times, Clio ran like a crazed reindeer in a snow-covered field, and now it’s pjs and legos and hot tea. Yeah. Last night we watched Searching for Sugarman, and, oddly, it featured more than a few shots of Rodriguez trudging around Detroit in thick snow. Just shots of him walking in the snow, and they were oddly moving. The whole film was surprisingly moving, as a matter of fact. It wasn’t really the story that got to me, although it’s a remarkable story, and although the music was intriguing, I didn’t feel like I knew all that much more about it for watching the film. It was the character of Rodriguez himself, as articulated by all the people around him. And not by the music critics and record producers, but by the Ordinary people in his life–his three wise and eloquent daughters and the bricklayers and construction workers he sees from day to day. We don’t actually hear him talk too much himself, which somehow suits the mysterious character we’ve been told about, who was so shy he performed facing the back of the stage. But his daughters and co-workers present the picture of a man who is content, not in a comfortable lazy way, but in a satisfied way, in the way of somebody who finds a lot to be happy about in small things, who is happy with what he has achieved, who is constantly curious and questioning, but not dissatisfied with what he has. Somebody who has his own definition of success, which extends from recording music to the hard labor he does to support himself in Detroit–demolishing and cleaning out houses. I’ll let Rick Emerson, a construction worker and friend of Rodriguez’s, tell you all about it, “He had this kind of magical quality that all the genuine poets and artists have: to elevate things. To get above the mundane, the prosaic. All the bullshit. All the mediocrity that’s everywhere. The artist, the artist is the pioneer….What he’s demonstrated, very clearly, is that you have a choice. He took all that torment, all that agony, all that confusion and pain, and he transformed it into something beautiful. He’s like the silkworm, you know? You take this raw material, and you transform it. You come out with something that wasn’t there before. Something beautiful. Something perhaps transcendent. Something perhaps eternal. Insofar as he does that, I think he’s representative of the human spirit, of what’s possible. That you have a choice ‘And this has been my choice, to give you Sugar Man.’ Now, have you done that? Ask yourself.” It’s almost as though he’s been reading Rolands Barthes, ““The film spectator might adopt the silk worm’s motto: inclusum labor illustrat: because I am shut in I work, and shine with all the intensity of my desire.” Because he’s shut out of a lifetime of fame and fortune, because he’s shut into the cold troubled city of Detroit, because he’s shut into his own creativity, he shines, and makes everybody around him shine with him. 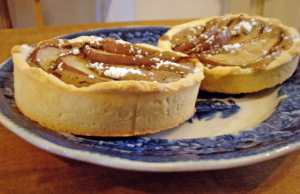 I bought some pastry rings at the flea market, and I confess I didn’t know what they were for. A small amount of research suggested that you place them on a baking sheet and line them as you would a tart pan. So that’s what I did. I made the crust out of a sort of shortbread dough. I had some crumbled hazelnuts and chocolate chips from another recipe I’ll tell you about soon, and I decided to combine them with a bit of egg and milk and process them until smooth, and then top all of that with slices of pear. Yum. I made two smallish tarts (I think they’re 12 centimeters across) but you could easily make this in a ten-inch tart pan. You might want a bit more pear, that’s up to you!

Here’s I Wonder by Rodriguez from Searching for Sugarman.
END_OF_DOCUMENT_TOKEN_TO_BE_REPLACED 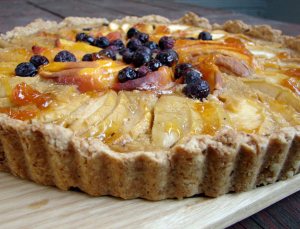 Well, I may as well go ahead and tell you, because soon it will be household news. I am, as industry sources have been leaking for months, at work on an epic poem on the subject of The Passing of Time and all of its Sickening Crimes. It will span volumes. It already has spaces slotted for it on the top of the New York Times best seller lists (fiction, non-fiction, how-to, and children’s), and I’ve booked some time on Oprah. It will be composed, in its entirety, in alternating dactylic tetrameter and anapestic hexameter. It will open with a chorus of anguished souls, and will rely heavily on deus ex machina, dramatic irony, and chiaroscuro. In one beautiful flight of fancy, entitled “Tempus Fugit? Indeed!” It will describe time personified as actual winged creatures, evolving from pteranodons to futuristic winged monkeys. In another section, entitled “Ripe,” the vista will open on a Russian farmer, who falls asleep in his fields on a warm day, and has a nightmarish vision of perfectly ripe fruit, just out of reach, rotting as he watches. Heavy, man! I don’t mean to get ahead of myself, but a rock opera is in the works, although it would be a breach of contract to describe the pop stars who are squabbling over the rights.

In all seriousness, I was thinking about fruit as I scrubbed the bathrooms today. (No connection!) The life of fruit and vegetables is like a little parable of time passing. In broad terms, because you can measure summer’s sometimes everlasting, sometimes fleeting progress by the cycle of ripening produce. Spring is small, sweet greens, wild ramps, fiddleheads and peas. All bright green and young and hopeful. Midsummer is plump and bursting with an overabundance of fat tomatoes and juicy zucchini. And fall is sharp and bitter and colorful. And in narrower terms, in the life of each fruit and vegetable, ripe and perfect for such a small moment of time, and then withered and decayed, rotting on the vine. Or on my counter. I feel like I’m doing a good job keeping up with the veg, this year. I go through the CSA box fairly easily from week to week. But I keep buying fruit, because I love it, and the boys love it, and I want them to love it. And it’s summer! If not now, when? Of course I keep buying apples, because I’m addicted to them, and then I complain that they’re grey, and David reminds me that apples probably aren’t in season anywhere in the world at this time of year! So I had a glut of apples and peaches. What to do? When in doubt, I make a tart. This is a light and lovely tart. It has a hazelnut crust, a light coconut custard layer, a layer of fruit, and then a slight glaze of apricot jam. With the rest of the apples and peaches, I made a crazy-tasty applesauce with vanilla, balsamic and black pepper. It’s deep and rich and complicated – a little salty a little sweet. Nice with vanilla ice cream!

Here’s Barbara Dane singing Woody Guthrie’s song Ramblin’. One of the most beautiful songs I know!