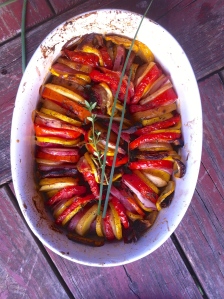 We’ve decided to watch every movie made in 1967. It is for fun! We chose 1967 at random, after watching La Chinoise a week or so ago. We’re obviously not going to watch every movie made that year, but we’re going to do our best. Some we’ve already seen and loved: Le Samourai, The Two of Us, Cool Hand Luke. Some aren’t available on DVD yet. But we’ll do the best we can, and I’ll probably tell you all about each and every film. As I said, we picked the year at random, but upon reflection it seems like an interesting time. (And wikipedia agrees, “The year 1967 in film involved some significant events. It is widely considered as one of the most ground-breaking years in film.”) On the cusp of a new decade, at the end of a decade of great change and tension and upheaval. People have new ideas, and they’re finding new ways to tell their new stories, new ways to capture the images, new ways to arrange their narratives. Many directors are working in color for the first time, and we’re moving from the cool black-and-white stylishness of the sixties to the polyester polychrome neon of the seventies. And the French are still driving enviably cool cars. (Have you seen Le Samourai?) Some films deal with shifting ideas about marriage and family. Some films are experimenting with the shockingly entertaining qualities of violence, from Bonnie and Clyde to Godard’s Weekend. We have films to distract you from your troubles–The Jungle Book, Elvis Presley movies, James Bond Movies, and films that tackle the issues head-on, like the Best Picture-winning In the Heat of the Night. Some people are looking back, and others are looking forward to a new world when anything is possible and everything is allowed. The new wave isn’t so new anymore, and the rebellious exploits of the early sixties seem quite tame and adolescent compared to what’s to come. It’s the year my parent’s got married, and two years before the summer of ’69, when men walked on the moon and I was born. I was going to tell you about the first movie we watched, La Collectionneuse, but this introduction has gone on so long that I’ll save it for another post. Watch this space! 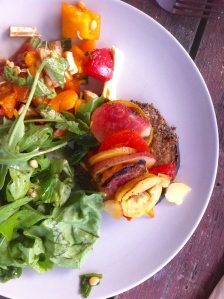 It’s squash, eggplant and tomato season, and we all know what that means! It means ratatouille! We thought it would be fun to try to make it like they make it in the movie of the same name. Lots of other people have already recreated that recipe as closely as possible, so we thought we’d mix it up a bit. We decided to pre-cook everything, so that it got a little crispy. We decided to add potatoes and beets, because they’re nice thinly sliced and roasted, and because we’ve had them in abundance from the farm as well. And I cooked the eggplant separately, because I like it best crispy and roasted breadcrumbs, nuts and herbs. I cut the eggplant in large rounds, and we used it as a sort of plate for the ratatouille. Delicious!