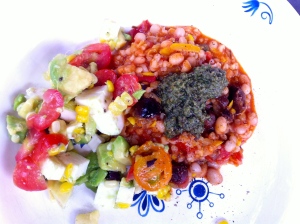 Godard’s 1967 film La Chinoise is full of words. The characters talk constantly, the walls of their apartment are painted with giant phrases and mottos, and the screen flashes with intertitles in a strange and jarring rhythm. And, of course, we don’t speak French, so we were also reading subtitles, as all of the dizzying layers of text were translated for us in rapid succession.

The film is a loose adaption of Dostoyevsky’s novel The Possessed, and it tells the story of five university students intent on violent revolution. They discuss ideology, they discuss art, they’re very well-read, and they talk about literature and theater and music. They discuss their plans, and for most of the film we suspect they’ll be all talk and little action. They discuss their love for one another, or their lack of love. They talk about class struggle, they talk about the workers, but they never work. Except for Yvonne, one of two women in the group, who is constantly cleaning, and tells of her part-time work as a prostitute so that she can afford things.

The film is shot mostly in the claustrophobic world of their apartment and their minds, both teeming with ideas and words so beautifully layered and confused and constant that they start to make a strange sort of sense. I think the film must have been one of Godard’s first color films, and he’s beautifully aware of color. Everything is red, white and blue, with Mao’s Little Red Book appearing in shifting stacks and patterns, becoming almost a character. The film is full of humor, it’s an affectionate satire. The students are foolish, even frighteningly so at times, but Godard loves them even as he disparages them. In one long beautiful scene, which finally breaks out into the world beyond the apartment, Veronique meets her old philosophy professor, a former revolutionary for the Algerian national liberation movement. She talks about her deeply-held political beliefs and she sounds like a child: she wants to close the universities, but she talks about how her one summer of actual work caused her to do really well on her exams. She talks about using bombs, and she says the word like a child would.

As in Masculin/Feminin, the violence is off-screen, botched, dreamlike. It’s hard to know if it really happened or if it’s all in their heads. The whole film is like a dream, floating away with humor and words and sixties pop style, but grounded with the idea that these students are discussing real people and real problems that continue to affect people around the world. 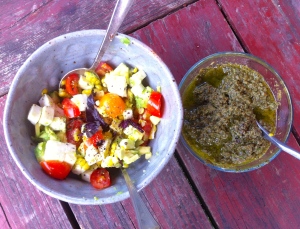 Do you like all the quotation marks in the title?!? It’s because this isn’t really mediterranean, and it’s not really chili. It seemed mediterranean because it has olives and beans and rosemary and pesto and harissa. It’s like chili because it has chili paste and beans and it’s a spicy sort of stew. Whatever you call it, it was very tasty. The chili is warm and rich and savory, and the salsa is light and sweet, and the pesto adds a real kick of flavor. We ate this with zucchini corn bread, but you could warm up some tortillas and eat it as tacos instead.

Here’s Mao Mao, a poppy punky song by Claude Channes from La Chinoise, which pretty much sums up the whole film.

Warm the olive oil in a large pot over medium heat. Add shallot, stir and cook, add the garlic, harissa and herbs. Stir till you have a sort of paste and cook until the garlic starts to brown. Add the grated squash, stir to coat with spices, and cook until the pan is quite dry. Add the wine and scrape the bottom of the pan. Add the white beans, stir and cook. Add the tomatoes, olives and capers and enough water to make everything nice and saucy. (I think I added about a cup.) Bring to a boil, reduce heat and simmer for fifteen or twenty minutes, till the tomatoes are nicely broken down. Add the butter, lemon or balsamic and season well with salt and pepper.

Put the avocado in a bowl. With a sharp knife, cut the kernels off the corn into the bowl. Some of them will stick together in little rafts, and that’s fine. Combine everything else and lightly toss.