Both boys have friends over. The little ones are playing together and describing very unlikely and very funny scenarios. “What if somebody was singing ‘Let it Go’ to a guy hanging off a cliff?” or “Who wants lunch?” “Me!” “I was talking about you being my lunch!” And the bigger boys, who have phones, are staring at their phones. We got Malcolm a phone for his birthday. It’s not a fancy one, it doesn’t do much, but I think he likes having it. Of course it’s depressing to see people lost in their phones, unaware of the world around them, shut off from nature and from living human society. It makes me sad that we’re all losing the ability to sit and do nothing and receive no information from the outside world beyond what we can see and hear and smell immediately around us. I’d rather see the boys “playing with their imaginations,” as Isaac says. As a word lover I’m not a huge fan of texting with its lazy abbreviations and insipid content. However, also as a word lover I’m so happy to exchange texts with Malcolm! He’s so funny and sweet. He texts us from across the room, from up the stairs, from the back seat of the car. And he texts from his friends’ houses when he’s far from home, so we know how he’s doing. 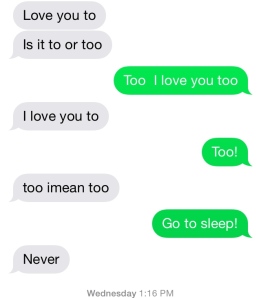 I can’t help thinking (again) of René Clair’s enthusiastic praise of film as a new technology, “In this era, when verbal poetry is losing the charm it exerted on the masses … a new form of poetic expression has arisen and can reach every beating heart on earth … a poetry of the people is there, seeking its way.” And there is poetry in short lines exchanged between people, when they’ve whittled their words down to express only the most important message, when they’ve tightened their language to convey the most meaning. There’s wit and poignance even in the inevitable misunderstandings and misspellings. Even the words themselves have been distilled to their essence. It reminds me of this poem by Robert Creeley:

I Know a Man

As I sd to my
friend, because I am
always talking, — John, I

sd, which was not his
name, the darkness sur-
rounds us, what

can we do against
it, or else, shall we &
why not, buy a goddamn big car,

drive, he sd, for
christ’s sake, look
out where yr going.

“In saying his poems, Creeley stops briefly at the end of each line, though without dropping the pitch of his voice. This gives it a jazzy, syncopated rhythm, very nervous. Thom Gunn calls it ‘a kind of eloquent stammering,'” which is how you could describe the rhythm of text conversations, although truly they are not always eloquent. Phones are here to stay, and are only going to become smarter and more engrossing as the years go along. We might as well embrace their brief rough poetry, we might as well be thankful for the way that they connect us.

It’s summer squash season! I like summer squash, but sometimes it’s hard to get excited about cooking it day after day. This was an exciting dish, though. Full of flavor and nice textures. I like the combination of jalapeños, raisins and olives, sweet and spicy and salty. I like grated zucchini and yellow squash, because they tend to melt into a dish, imparting their fresh summery flavor.

Instead of a song today, I’ll give you a video of a man using his phone to make little films that make the ordinary more interesting.

In a large skillet over medium heat, warm the butter or olive oil. Add the jalapeño and shallot and stir and fry until the shallot starts to brown. Add the garlic and raisins, and fry for about one more minute. Add the grated squash, stir to coat with spices. Cook until the squash starts to wilt and brown, a few minutes. The pan will become a bit dry, so add the chickpeas and white wine, and scrape the bottom of the pan. Add the olives and enough water to make everything a bit saucy. Cook at a lively simmer for about ten minutes, till everything is cooked through and soft but still bright. Add the butter, lemon, salt and pepper and stir in the basil and top with more fresh basil and pine nuts.

6 thoughts on “Summer squash and chickpeas with olives, raisins and basil”