It’s been a heavy sort of a week. Everything feels a little more dangerous and uncertain than it generally does in our part of the world. It would be easy to fall into an anxious frame of mind, and hide under the covers all day. I’ve got all sorts of heavy thoughts in my head, because I’m that kind of person, and all sorts of serious things to talk about. But the thoughts that keep rising to the surface are much lighter, brighter thoughts. They’re about a cartoon. We have a fairly strict NO TV BEFORE SCHOOL policy in our house. But, like all our fairly strict policies, it’s made to be broken. Lately we’ve been watching one 11-minute episode of Adventure Time each morning, and I can’t tell you how much it’s grown on me! It’s the story of Jake the Dog and Finn the Human, they live together (without parental supervision!) in a giant rambling tree house. They go on adventures. They wander their strange world looking for evil to fight and people to save–they’re self-proclaimed heroes. The beautiful thing about them is that they’re like children–they’re like my children–they’re silly and they make dumb fart jokes, they don’t fully understand the adult world around them, but they wade through it anyway. They don’t fully understand their own emotions, but they try. They’re cheerful, they’re pranksters, they’re good friends, they’re up for anything. They seem fearless, and in many episodes it’s their fearlessness that saves them. Because in the cartoon, as in life, oftentimes the evildoers’ only real power is to cause fear and manipulate people based on their fear. But they’re not fearless. In my favorite episode, Finn confronts his fear of the ocean, using Jake’s five-step method (which includes rhyming couplets!). I’m scared of the ocean! It was bizarrely comforting to learn that Finn is too. And he never overcomes that fear, he learns to embrace it, because all heroes have a flaw. Finn and Jake live in the land of Ooo, which is a very strange place. But while all the strange situations feel so familiar, and the characters feel so human–flawed and morally complicated, petty and generous, brave and foolish. There’s a childlike logic to the show that makes it feel so perfect–that makes it comforting and inspiring in the way that talking to Malcolm and Isaac is comforting and inspiring. The way they look at the world is so rationally nonsensical and hopeful. I like to walk to school with Isaac humming the end credits theme song in my head. “We can wander through the forest and do so as we please.” That’s what we do! We wander through the forest together. And it’s a little easier to face a heavy scary world if you do so as heroes, looking for adventure, trying to be righteous, trying to muddle through.

END_OF_DOCUMENT_TOKEN_TO_BE_REPLACED 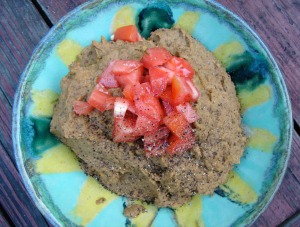 We’re hunkered and bunkered down, waiting for hurricane Sandy to stop by. At the moment we’ve got driving rain and fairly wild wind. But we still have power, so I can’t complain. We’re all a little stir crazy, but I’m actually having a nice day. We’re all together, the boys didn’t have school, and we were asked to stay off the roads, so David is home, too. I baked a cake. I made a big pot of sweet potato, red bean, kale and pumpkin ale chili that will hopefully keep warm for dinner if the power goes out, and I’m currently drinking the rest of the pumpkin ale. We’ll sit and draw for a while. I can’t complain!

I’m not up to my usual rambling nonsense, so I made a playlist about storms, floods, winds and rain. I’m open to suggestions for songs to add!

And I’ll just tell you quickly about this yummy meal. Loosely based on my understanding of tunisian carrot salads and on Ethiopian ful, this is a spicy puree of carrots, olives, and fava beans (the dried and cooked kind, I used a canned variety) Quick to make, and delicious with these caraway seed flatbreads.

END_OF_DOCUMENT_TOKEN_TO_BE_REPLACED

Malcolm and I were walking the hot streets of town the other day when we came across a basket of GI Joe figures in front of an antique store. It made me think of the movie Marwencol 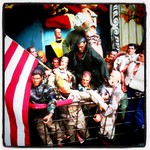 . It’s a fascinating, absorbing documentary – the kind you think about for a long while after you’ve seen it. I couldn’t get it out of my mind, yesterday, and yesterday being independence day, the story of Mark Hogancamp became, in my melting little brain, a sort of allegory for America’s struggle for independence. In the face of violent intolerance, Hogancamp created his own country, with its own rules. The country, Marwencol, is hopeful, frightening, imperfect and evolving, and it’s the place where Hogancamp can escape from the physical and emotional reality of who he is, to be a different, better version of himself. And to pursue the justice that eludes him in the old world – the real world. He’s a true eccentric, just as the people that first came to America must have been, and the people that created our country, and forged a path out west, surely were. It’s the creativity and passion attached to his eccentricity that make his new world possible. And the story of the new world is beautiful and hopeful, but it’s also violent and disturbing at times. Of course, the story of Independence Day is the struggle for freedom, just as the story of Marwencol is Hogancamp’s quest for freedom from who he is and from all that he’s lost. David found a remarkable version of Nina Simone’s I Wish I Knew How it Feels to Be Free. She talks about what freedom means. She says it’s freedom from fear, it’s a new way of seeing something. There’s a line in the song in which she says that freedom means feeling a “little less like me.” She’d learn to fly, and she’d look down and see herself, and she wouldn’t know herself. She’d have new hands, new vision. She tells us that the Bible says be transformed by the renewal of your mind. God, she’s brilliant – she makes me speechless. But this is what I was thinking about on the 4th of July – eccentricity, creativity, the freedom to create a world for yourself and reinvent yourself. A new way of looking, and of seeing.

Speaking of eccentric! Speaking of yankee ingenuity! I envisioned this zucchini fritters with chickpea flour. They were all out of chickpea flour at the grocery store. I pretended to be a stubborn child, who wouldn’t leave the aisle till I got chickpea flour, the boys pretended to be stern parents. We all had a giggle. And I went home and made these croquettes with mashed up chickpeas. Which might even have had a better flavor, and a lighter, more pleasing texture. We ate these with pita bread, tomatoes chopped with mozzarella and basil, lots of fresh lettuce from the CSA and pecan tarragon sauce. You could use any kind of sauce you like, though. Something with tahini would probably work well! I seasoned these with sesame seeds, thyme, and sumac (zatar, baby!) All-in-all a nice summer meal.

Here’s that remarkable version of I Wish I Knew How it Feels to be Free.

END_OF_DOCUMENT_TOKEN_TO_BE_REPLACED

The night we had these for dinner, Malcolm asked if he could have another. (I think he’d already had two!) I said, without thinking, “No, I’ve got to save them for a photograph.” Then I realized how crazy I’d gotten. Instead of being glad that my 9-year-old son liked sweet potato flatbreads enough to ask for another. Instead of being thankful that he was eating a healthy food, with vitamins and whatnot (sweet potatoes have vitamins, right?), I was going to save them to take a picture. Ridiculous. Well, I quickly saw the error in my ways, and let him eat one more. (Yes, I did save one!)
Here’s how it all came about…we had some leftover stew, and for some reason I was semi-obsessed with the idea of making flatbreads to go with it. But I wanted to do something different. I wanted to use some unusual ingredient. I thought about all the different kinds of flour in the cupboard. But I’ve already made toasted barley flatbreads, and semolina flatbread. Then I thought about the sweet potato I’d bought on a whim. Why not put that in? And I’d just bought a huge bunch of fresh rosemary, so we’ll have some of that, too. And we’ll roast them together, rather than just boil and purée the potatoes, for more intense roasty flavor. So that’s what I did! The dough was a pleasure to work with – soft and firm at the same time, just as dough should be. I wanted them to be sort of light and puffy, so I made them the way I’d made pita bread one time, on a preheated baking sheet. They puffed beautifully! I was so happy! I love a bread that you can tear apart and use as a spoon, and stuff with delicious foods. I finally let Malcolm eat the remaining flatbread the next day, and it was good reheated as well.

In the early days of this blog, I foolishly used up all my sweet potato songs at once in a small playlist. It’s been a while, and they’re all good songs, so I’m just going to repost it here. Something to listen to while you wait for your dough to rise!
END_OF_DOCUMENT_TOKEN_TO_BE_REPLACED