Dear Sir and or Madam: I am writing to apply for the job/ the grant/ the fellowship/ or to submit a story for publication. I realize that roughly a million other people are applying for the position and that they’re at least as skilled and qualified as I am, and all just as passionate about attaining the position/grant/fellowship/publication. I realize that I have absolutely no qualities to recommend me over these other million people, and that they’ve probably graduated more recently with higher honors, and have probably worked in the field some time in the past decade, as I have not done. They probably have more powerful friends to recommend them, more scintillating personalities and better networking skills. They’re probably better at ironing their clothes, being team players and using the latest computer programs. They probably smile more often and more convincingly, they’re probably bubbly. They’re probably effervescent. However, I hope you will take the following information into consideration when making your final decision: My dog really likes me. No, she hasn’t told me so in so many words. She hasn’t put it in writing, and I can’t give you her contact information so that you can determine the veracity of my statement. But it’s true, I tell you! You should see how happy she is when I come home from work or even from a walk around the block. She leaps! She sings! She wags her tail so vigorously you’d think it would fall off! If I’m in the house, she’s likely to be near by me, and I’m fairly sure it’s not just because I’m always eating or playing with food. When I sleep, she’s always practically on top of me, and when I wake and come downstairs, she does too! Sure, she likes everyone she meets, and I can’t guarantee that she likes me more than anybody else, but it’s not a contest, is it? Oh, it is. It is a contest. The whole world is a competition. I see. And maybe everybody’s dog loves them as much as I think she loves me. It’s probably true, I understand. I’ve decided not to attach my resumé, because despite a promising beginning and lots of opportunities, it seems to taper off somewhere in the middle and the last decade or so is frankly… Well, instead I’ve attached some pictures of my dog! And proof that she has her license and rabies shot! If you need any more information about her, or would like to set up an interview with her, just let me know! She won’t mind, she loves meeting new people. She’ll tell you all about how good I am at going for walks and napping and putting kibble in her bowl and singing every song ever written as if it was about her. Well, she would tell you if, you know… In summation thank you for your consideration, and I hope you’ll look at this whole process from my dog’s point of view, if only for an hour or two. 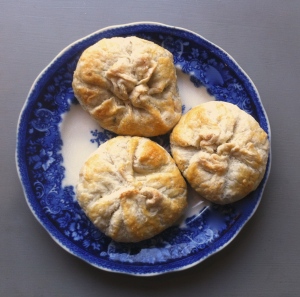 We’ve had more icy weather, the boys are home from school for the second time in three days. It’s a long long winter. I felt like eating something plump and savory and comforting, and that’s just what these little dumplings are. They’re fairly simple: kale, spinach, butter beans and cheese baked in a crispy crust. Obviously, they aren’t steamed yeasted dumplings, and they’re probably not officially dumplings in any sense of the word, but that’s the name that their shape suggested to me.

Here’s I Wanna be Your Dog by Uncle Tupelo. I love this version!