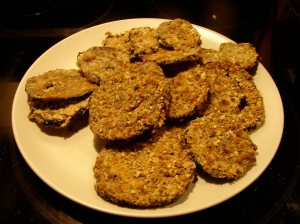 Eggplant can be a tricky vegetable. If not cooked properly it can taste odd and bitter, and the texture can be unpleasantly slimy and spongy. But…if cooked properly, it can be most delicious. After years of perfecting my eggplant-cooking technique, I’ve arrived at the best recipe in the entire universe! Well, probably not, but it is really good, and it does tend to appeal to people who don’t believe they like eggplant. The eggplant is sliced thinly, marinated with balsamic and herbs, and then dipped in egg & breadcrumbs. Typically I use a mixture of herbed flour and breadcrumbs, but I’ve also used cornmeal, oatmeal, semolina, and nuts, and it’s all good! It’s oven-fried…baked on a sheet covered with oil, until it’s crispy and light. These slices of eggplant can be used in a million different ways. They’re good with various different sauces and good bread. They’re good cut into pieces or layered whole in savory pastries. If you slice the eggplant lengthy-wise you can roll them up around various fillings, and rebake them with a sauce or without. Good on pizza, good with pasta, good with roman gnocchi… 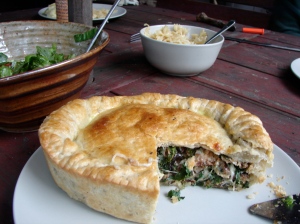 Here’s Dr. West’s Medicine Show and Junk Band with The Eggplant that Ate Chicago. Maybe this is why eggplant got a bad name!

Olive oil for the sheets.

1. Peel four long slices of skin, lengthwise, and then cut the eggplant in 1/4 inch slices. You can cut crosswise to make circles, or lengthwise to make long slices, depending on your intentions for the finished epplant.

2. Put the slices in a shallow dish and shake some salt over them. Leave them for at least 1/2 hour, and then try to blot up the eggplant juices that the salt has brought out.

3. Put olive oil, balsamic, 1 crushed garlic clove, and rosemary and basil in with the eggplant slices. (Use more or less oil & vinegar depending on the size of your eggplant) Turn them from time to time, to be sure that every surface gets a chance to soak up the marinade. Leave for at least 1/2 hour.

6. Bake for about 1/2 hour, turning the slices every once in a while, until they are browned and crispy.

23 thoughts on “Eggplant that anyone can love”