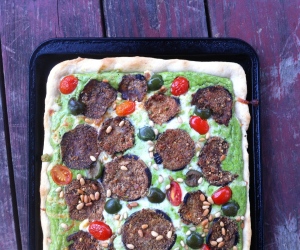 The other day Isaac asked why gold is valuable, and we instantly answered, “because it’s rare.” By this same logic, it’s more thrilling to see a cuckoo than a sparrow or a wild rose than a blade of grass. When I was little I had a small notebook with a mouse on the cover. I loved it. And I collected different kinds of grass, I pressed them in the book, and I was going to try to identify them. Well, it’s hard to identify different kinds of grass! Similarly it’s hard to tell one sparrow from another. They’re not widely varied in color or size, and we see some kinds of sparrows so often it almost doesn’t seem worth our while to determine which particular type each is. We almost don’t notice them anymore. But sparrows have some of the prettiest songs. And not just remarkable for their sweetness, but also for being virtuosic, haunting, with a beautiful tone unlike any other bird’s. And when you see them sing, (which isn’t hard to do, they don’t need to hide because nobody is looking for them, except for other sparrows, of course!) they look joyful, they look happy to be singing. And grass is some of the prettiest, sweetest smelling vegetation on the planet, though it’s not often brightly colored and showy. The true grasses, and the sedges and the rushes, cereals, bamboo and the grasses of lawns. And grasses are among the most useful of plants, giving us food, drink, thatch, even paper. And each blade of grass and each sparrow is unique, is unlike any other, and has experienced life as no other has, which makes them rare, which by our original logic makes them valuable. And being a human, I can’t help thinking about this in human perspective, and thinking about how each person is unique, is wonderfully rare, has a whole world of thoughts and experiences and feelings inside of them that nobody else has ever had ever. And as any grammatically minded person will tell you, it’s impossible to be more unique, it’s a word that can’t be modified. We don’t have stages of uniqueness, you’re not more unique, or somewhat unique or quite unique. Either you’re unique or you’re not, and, as it happens, you are. Which makes everybody equally rare, equally valuable. The thing we all have in common is that we’re all uncommonly precious. 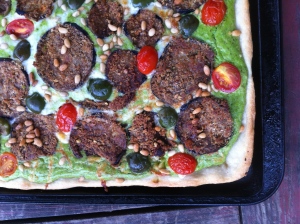 This is a tart on a pizza crust. The thing that makes it a tart rather than a pizza with strange toppings, according to my own definition, is that it has eggs in it, so it’s almost like a wide shallow quiche. You can put any toppings you like on it, but I highly recommend this combination. Make the eggplant one night, and you can use the leftovers in a million different ways.

In a large bowl combine the yeast, sugar and 1/2 cup warm water. Mix and leave in a warm place for a few minutes to get foamy. Add the flour, salt, pepper and olive oil and stir to combine. Add just enough warm water to make a workable dough. Knead for about five minutes. Return to the big bowl, which has been lightly coated in olive oil. Leave in a warm place for an hour or two to double in bulk. Fold it down, and let it rise again while you make the filling.

Preheat the oven to 425. Lightly coat a big baking sheet with rims with olive oil. Press the dough into the baking sheet to make a thin layer, building up the edges to make a crust. Bake for about 7 minutes, till it loses its shine.

Combine everything in a food processor and process until smooth. Pour this into the partly pre-baked tart crust.

Before baking top with eggplant anyone can love, castelvetrano olives, pitted and halved, grape or cherry tomatoes, halved, pine nuts.

Bake for about 20 minutes, till puffed and golden and firm to the touch.