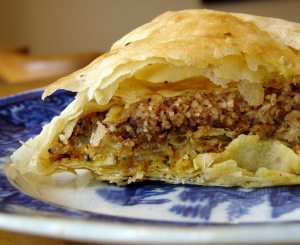 “I made warka!” I cried, as I skipped around town. “Hello, man putting air into your tires! I made warka! Hello, woman trying to parallel park her enormous SUV on the wrong side of the street! I made warka! Hello, young mother hurrying by with your child and shielding her eyes from the madwoman singing about warka! I made warka!” And then all of the inhabitants of the picturesque little town joined me in a synchronized dance and a stirring rendition of the warka song. Okay, none of that really happened. But I was so excited about making warka that I felt like telling total strangers on the street.

Warka is a paper-thin dough, somewhat like phyllo but even thinner. It’s one of those things you don’t imagine anybody can actually make in real life. But it can be done! It’s not difficult, and it’s actually kinda fun. Here’s how it all began. I’ve been dreaming of making a vegetarian version of a moroccan pastilla for months. The combination of sweet & savory sounded so intriguing to me. The idea of eating pigeon did not! Well, the other day we had a street festival in town. As festivities were winding down and people were packing up, my two young children began playing with the children of the woman running a stall across the street. I started talking to their mom. She’s from Morocco. Being a crazy person, I (almost) immediately said, “Do you know how to make pastilla?” Of course she did! I told her I was vegetarian, and she advised me on the vegetables to use, and how to prepare them, and how to arrange all the layers. She suggested phyllo dough. But can’t I make my own? I asked. Ah yes, she said, and she told me how.

She suggested equal parts flour and water. I ended up using a bit more water, and added a bit of lemon juice and oil. I’d seen this post on making warka, and I tried to incorporate some of the methods contained therein with the advice of my new friend. I used a non-stick griddle. I put it right on the burners, though. The first one came out a little messy, but I got better as I went along. It doesn’t matter if they turn out super flaky, because after you pile enough of them on top of each other, they make a more cohesive whole. 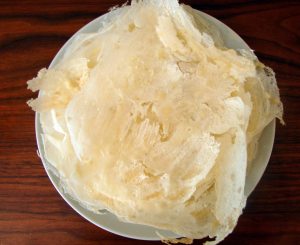 The pastilla itself was very delicious, but there was a bit of a disconnect between my expectations of when you eat cinnamon sugar almonds, and when you eat garlic, turnips and shallots. The more I ate, the more I got used to it, and the better it tasted!