On the way home from school, Isaac and I walked past a woman undone by a perfect flower. She was a landscaper, working in somebody else’s garden, and she was rendered speechless by a heliobore. She stood, hand on heart, looking at the flower, watching it grow. I imagine this is a fairly common danger in her line of work, this time of year. But I’ve seen it happen elsewhere. I worked in a restaurant in Boston, and one waitress was famous for having once worked in veg cut – slicing vegetables. She would be moved to tears by a lovely slice of beet, a perfect half leek, knocked off track by the beauty of the vegetables she was cutting. I imagine every profession has some unexpected beauty, if you look hard enough and take the time to notice. I’m sure it’s easier for a person whose job is to plant flowers in springtime than for a person who, say, scrubs toilets for a living, but even then, there might be some swirl in the water, some curve in the porcelain. As a waitress I’m sometimes moved by the beauty of certain gestures. People together, taking a table, preparing to eat, arranging their plate just as they like it – talking to each other or communicating without words. If you take the time to notice, these small moments can be worth keeping, they can knock you off track for a moment and take you out of your routine. As disarming as an unexpected kind word. Of course songs can be like that as well. Sometimes you’ll hear a song and you have to stop what you’re doing, and just listen. So today’s Sunday Interactive Playlist is very subjective and personal. We’re looking for songs that have disarmed you with their beauty, or with some other significant characteristic.

This pate is green, which is why I’m allowed to talk about it on St Patrick’s Day. It was very simple to put together, but a nice blend of flavors, a little sweet a little tart, and quite addictive. We ate it with pita bread and with crackers, but it would be nice with a baguette, as well. Or it would make a nice side dish for any meal.

Here’s the Interactive Playlist, feel free to add songs you like. I have to go to work, so I’ll be adding most of my songs later this evening.
END_OF_DOCUMENT_TOKEN_TO_BE_REPLACED

“Now, on a Sunday morning, most of the windows were occupied, men in their shirtsleeves leant out smoking, or carefully and gently held small children on the sills. Other windows were piled up with bedding, above which the dishevelled head of a woman would briefly appear. People called out to each other across the street, one of the calls provoked a loud laugh about K. himself.” I read The Trial by Franz Kafka in high school. Now, decades later, I will admit to being a little fuzzy on the plot and themes, and whatever else we probably wrote our paper on. But for some reason this image, of a man leaning out the window in his shirtsleeves on a Sunday morning glows in my memory and my imagination. I could feel the air, morning-cool, but warming every moment. I could see the man’s shirt, it was white, with thin blue stripes, soft and light. I could even feel K.’s awkwardness, his sense that he wasn’t part of this busy world of people starting their day. I like to read about people at windows, and I don’t know why! But I’ve collected a few samples, for your delectation, and I expect a 5000 word essay on my desk tomorrow, explaining the significance of the window in each example vis-a-vis the tropes of subtexts signifying the microcosm of the other in the substantiality of the now. Or you could share some memorable quotes describing people leaning out of windows that have stuck in your mind half your life. Or you could say, “you’re crazy, man, nobody collects literary passages about windows. I’m out.” The choice is yours! Ready? Begin!

Shall I say, I have gone at dusk through narrow streets
And watched the smoke that rises from the pipes
Of lonely men in shirt-sleeves, leaning out of windows?

(T.S. Eliot, of course! The lovesong of J. Alfred Prufrock)

It was to remember the streets of Harlem, the boys on the stoops, the girls behind the stairs and on the roofs, the white policeman who had taught him how to hate, the stickball games in the streets, the women leaning out of windows and the numbers they played daily, hoping for the hit his father never made.

(James Baldwin, Another Country, which has people leaning out of windows all over Manhattan and the South of France)

..while at times I feel that to be able to cross the Rue Saint-Hilaire again, to engage a room in the Rue de l’Oiseau, in the old hostelry of the Oiseau Flesché, from whose windows in the pavement used to rise a smell of cooking which rises still in my mind, now and then, in the same warm gusts of comfort, would be to secure a contact with the unseen world more marvellously supernatural than it would be to make Golo’s acquaintance and to chat with Geneviève de Brabant.

(That would be Proust)

Young Woman At A Window

(And our William Carlos Williams)

I wasn’t really sure where I was going when I made this pate, but I like where I ended up. This was delicious on small whole grain toasts, with a few sprigs of arugula and a thin slices of smoked gouda. It’s made by braising fennel and garlic in white wine with a bit of rosemary, and then pureeing this mixture with walnuts and ricotta, adding an egg, and baking until set but soft. It made a nice side dish warm, the first night I made it, but it was better the next day, at room temperature on toast.

Here’s Woody Guthrie with Do You Ever Think of Me (“At my window, sad and lonely, often do I think of thee…”)

END_OF_DOCUMENT_TOKEN_TO_BE_REPLACED 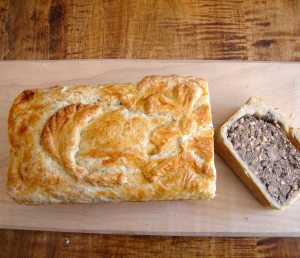 This dish is so fancy! How fancy is it? Well, you’ve got your paté, and you’ve got your croute. That’s fancy! Can’t you just hear Mrs. Patmore saying, “Daisy, stop your daydreaming, and get this up to the grand dining room before Lady Mary collapses in her corset!” Of course, in that scenario, this would probably be stuffed with pheasants. Not here, my friend!

Break it down, and this isn’t hoity toity at all. It’s two of my favorite flavors together – roasted mushrooms & french lentils – mixed with ground almonds, ground hazelnuts, a bit of cheese and some herbs. And all wrapped in a peppery, flaky crust. Now doesn’t that sound good? And healthy? This isn’t hard to make, and most of the components can be made ahead and saved until you’re good and ready for them. I believe there are pans devoted to the preparation of patés. I don’t have one of those! I do have a nice loaf pan from ikea. It’s a little longer and thinner than your average loaf pan. In truth, any such loaf pan would do. This serves quite a few people, and it does seem special, so it would make a nice dinner party meal. But we had a nice weeknight dinner of it- thick slices of this concoction, roasted rosemary potatoes and a big salad.

Here’s Fancy Pants, by Count Basie and his orchestra.
END_OF_DOCUMENT_TOKEN_TO_BE_REPLACED 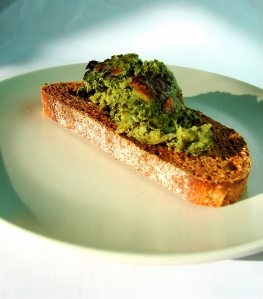 Brassicaaaaaaaaaaaaaaaaaaaaaaaaa! This paté brings the sexy back to your brassica. Yes, they smell funny when you cook them. Yes, they’re good for you. Yes, when overcooked they’re stodgy and horrible. But brassica can be really delightful – bright, green, flavorful, juicy! That’s how we find them in this delicious and simple paté. My sister-in-law, Christy, was over for dinner the night I made these. She doesn’t like kale or broccoli (I know, I’m a very considerate hostess!) but she asked for two helpings of this! We ate this on thinly sliced toasted whole grain bread with a bowl of soup, and it made an easy, satisfying meal. It would make an elegant appetizer, as well, or snack for a party.

Here’s Beirut’s brassy Gulag Orkestar to listen to while you boil your brassica.
END_OF_DOCUMENT_TOKEN_TO_BE_REPLACED