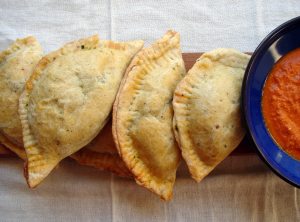 I bought these beautiful little green olives. I can’t remember what they’re called, but I think they might have been castelvetrano olives. They were small and round and serpent green. Lovely! They were so pretty that it might have been a shame to stuff them inside of empandas – if the empanadas hadn’t been so mother-flippin delicious!

They have three kinds of greens – chard, kale and spinach, they have very green olives, and they have pistachios, which are green nuts! They also have ricotta, mozzarella and lots of herbs. I’m especially pleased with the texture of these. You never know how it’s going to go with greens and ricotta. Will they be watery and runny? Or mushy? This was perfect, though. Juicy, almost, but not soggy. It occurred to me that these were like large, baked, crispy ravioli, and in that spirit, I added a little semolina flour to the dough. (If you don’t have semolina flour, just leave it out. Or add 1/4 cup regular flour to replace it. Either way. )I made a sauce to go with these with roasted red peppers, almonds, tomatoes, paprika and chipotle. It turned out very spicy!

Here’s REM’s Green Grow the Rushes, because I’ve had it going round in my head lately.
END_OF_DOCUMENT_TOKEN_TO_BE_REPLACED

This is the time of year for savory pastries! (somebody told me I say the word “savory” too often. And perhaps I do, but somebody’s got to!) They’re so warm and comforting, and they’re the perfect solution to the problem of trying to feed vegetarians a holiday meal. Or to feed non-vegetarians a meal special and satisfying enough that they don’t miss their meat.

Let’s start with the grandmother of all savory pies…the Empanada Gallega. This empanada is probably the source of empanadas all over the world. It hails from Galicia, in Northwestern Spain, and it’s a large flat pie that would be cut into pieces. I’ve never been to Galicia, and I’ve never eaten a genuine empanada gallega, but I’ve been so taken with the idea of it, and I’ve read so much about it, that I feel like I have! I’ve cobbled together a vegetarian version of my idea of an empanada gallega. It’s delicious, relatively simple to make, and it feeds a lot of people. I believe that seafood, specifically tuna, is used in the real version. I’ve experimented with different types of vegetables…mushrooms, eggplant, spinach, zucchini. The combination I like best, in the end, is artichoke hearts and zucchini. Baby spinach would work well in that combination, too, if you’re in the mood. If you’re not a fan of zucchini, you could stick with artichoke hearts by themselves. Whatever you like! We’re making it up as we go along, so it’s very adaptable. You know what would be good? Artichoke hearts and roasted red peppers. I’ll try that next time!!

In Galicia, the patterns on the pies help to identify what kind of filling is inside. Since I just make one at a time, we just have fun with them. My son made the owl!