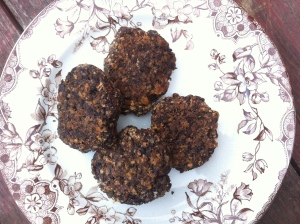 I like the idea of Roland Barthes’ Mythologies. Have I read them? I have not, not even a smicker of them, as our Malcolm used to say. Will that stop me talking about them? It will not! According to my understanding, Barthes examines certain aspects of modern life that have become accepted as fact and shows how they are, in truth, myths: stories that we use to define ourselves and our place in the world. Barthes was writing in France in the 1950s, and it seems that now, here, in America in 2014, we’ve woven such an insane tangle of stories to explain ourselves to ourselves and the rest of the world that it’s almost overwhelming. It seems important, though, to take a step back from time to time, and to try to unravel them to arrive at some truth. Some ever-shifting never-reachable truth. Here’s one I’ve been thinking about lately. “You get what you get and you don’t get upset.” It all starts in pre-school, when they’re handing out crayons or cookies. The fundamental idea, of course, is to be content with what you’re given, and to shut up and stop whining! At its most basic, it’s toddler crowd control. At its most basic, I like the idea. I would like my children to be capable of contentment, a difficult state to achieve. I would like them to be grateful to get anything at all. I would like them to be even-tempered and agreeable rather than whiny and difficult. Of course I would. And I would like to live in a world where these qualities are rewarded. But the truth is that we don’t live in that world. We can send an army of five-year-olds home chanting the catchy little rhyme, but if they absorb the lesson too completely how will they ever become successful modern Americans? We’re not supposed to be happy with what we have! We’re supposed to want more! Too much is never enough! We’re supposed to want whatever other people have. It’s one of our older myths, as Americans, that if we work hard and strive for more, for better, we can achieve success and riches. How would advertising work if people were content with what they had and who they are? It wouldn’t! It wouldn’t work, and billions of advertising dollars would be wasted trying to manipulate people based on desires and insecurities they didn’t really feel. In America we award the loud people, the talkers, the salesmen, the people who want what they get and want what everyone around them gets, too. We don’t admire people who settle. We’re scornful of people who don’t strive to better themselves, even if they face insurmountable odds such as we can’t even dream of. I believe there are countries where ambition is looked upon as a negative quality, as a vice, but we don’t live in such a country. As long as we’re telling stories about the world we inhabit, I’d like to tell this one: You get what you get, and you change it to make exactly what you need. And if you don’t get the right parts to make what you need, you share with your neighbor. You trade them the parts they need for the parts you need, and everybody creates exactly what they want. Obviously, if everyone makes a picture with the one crayon they’re given, which might not even be a color they like, it won’t be as satisfying as if everybody shares all the colors to make their pictures. Everybody makes something beautiful. And still, nobody gets upset.

Croquettes! Or kofta, if you like. Or burgers. These would make great veggie burgers! These are very flavorful, very umami-ish. They have a nice texture-quite crispy. We ate them in warm tortillas with chopped lettuce, tomatoes, avocado, grated sharp cheddar. Which was delicious! But you could also make them larger and put them on a bun to make burgers. Black rice is not hard to find, I think, but you could make these with any other kind of rice, even rice leftover from your take-out food. All of these things, the lentils, the rice, can be used in other meals, which is good because the recipes given below will give you more than you need.

END_OF_DOCUMENT_TOKEN_TO_BE_REPLACED

What do you do with all of your leftover risotto? Turn it into croquettes, of course! You could make these with any risotto, I think, but I had beet lime risotto left, so that’s what I used. They’re very very simple to make, and they make a nice meal with a big salad. I couldn’t decide if I should fry them or bake them, they’d be crispier fried, but they’d fall apart and smoke up the kitchen, so I decided to bake them. If I had a deep fryer, I probably would have used that. But I don’t! (As we discussed this conundrum, my husband and I came up with the idea of slow cooker deep frying. For maximum oil absorption! Yum!) Baking them also gives the special surprise cheese in the center a chance to melt. What’s better than melted surprise cheese? We had these with a sauce made of pesto, balsamic, and a little of the broth that I used to make the risotto itself, but you could vary the sauce to suit your mood or the risotto that you used. My son dipped them in barbeque sauce!

Asparagus tips look yummy, yummy, yummy
Candied yams inside my tummy
A collage of good eats, some snacks or nice treats
Apple sauce and some nice red beets
This is what we snack on when we’re Questin’
(both: No second guessin)