This soup is like green velvet. Greener than velvet is this soup. Ahem. This soup is made with a base of pecan tarator sauce. That’s what makes it smoooooth, and that’s what gives it a wonderful depth of flavor. I used butter to make this, but if you used olive oil instead it would be vegan, and yet so mysteriously creamy! I made croutons from the same whole grain bread that’s in the tarator sauce. I cut it into rough cubes, fried them for a few minutes in olive oil, and dusted them with basil and black pepper. 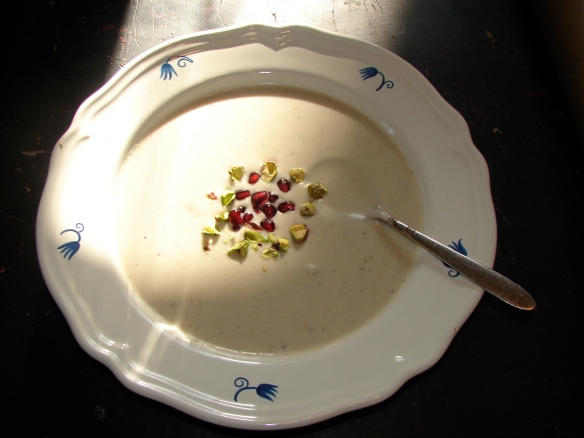 As everybody knows, Mr. Bingley! (his name has to be followed by an exclamation mark – by law!) couldn’t hold a ball at Netherfield until his cook had made enough white soup. I’ve always been mildly curious about the nature of white soup. After a bit of research, I was excited to discover that this white soup is not dissimilar to a tarator sauce, comprised, as it is, of nuts and bread soaked in water. This one has almonds in it, which help to give it the lovely ivory color. The original version also had capon or gamon or something, but obviously I’m having none of that! I decided to use cauliflower, because it’s white, and it makes such a tasty puree. And I decided to use white beans. Can you guess why? That’s right! They’re white! And delicious.

I had read that white soup was traditionally garnished with pomegranate seeds and pistachio kernals. Red and green! On a beautiful, creamy pale soup! It’s the perfect Christmas dinner starter!

I have to admit that I was mostly playing around with this recipe. But it turned out to be exceptionally good to eat, too! It’s creamy and smooth, but there isn’t a jot of cream in it. In fact, if you omit the dollop of butter it would be vegan. And how did it taste? Mrs Bennet is quoted as saying, “Mr Bingley! This soup is mother-flipping delicious!!”