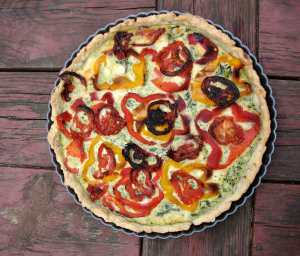 Spinach and goat cheese tart with roasted peppers and tomatoes

I have this strange feeling lately, from time-to-time, that I can’t complete a sentence. The words will get stuck somewhere between my brain and my tongue. I’ll wait patiently and powerlessly for somebody to hit me on the side of the head and unjam the process, but whomever I’m addressing will just give me a pitying but bewildered look and go about their business. Why is this happening? I don’t know! It’s senility, probably, but it feels oddly adolescent. I believe I spent my teenage years desperately trying to get my strange thoughts into the world, and then desperately trying to recall them and hide them away once I had, mortified by their strangeness and lack of consequence. And then as I got older I became much chattier, because I simultaneously realized that some of the best thoughts are strange thoughts, and that nobody gives a hoot about what you say, anyway, because they’re not listening half the time and they certainly won’t remember. There’s no point in agonizing regretfully over some stupid thing you said when nobody heard it in the first place. Thus followed a long period of time when I never stopped talking. I turned into a veritable warbling vireo. But with maturity comes increased self-doubt and self-censorship, and the new realization that it doesn’t matter all that much anyway what you say, because nobody is listening half the time so why bother? And you understand that it’s good to listen to other people, and that you have to stop talking for a minute in order to do that. Last night I was lying next to a pukey Isaac as he drifted off to sleep and listening to his odd, sleepy thoughts. He pondered the difference between funny ha ha and funny strange. It bothers him that people use “funny” to mean strange, because it’s not really funny at all. And it suddenly made perfect sense to me that the truth is funny strange, and the best way to express it is with the humorous kind of funny, as comedians and court jesters have known for centuries. And the best way to do this is to be fearless and to plough right on through even if the words come out garbled. And we may both have fallen asleep before I articulated all of this, but that’s okay, because my smart, honest, eloquent Isaac is every kind of funny, and he knows it already. So if I’m talking to you and I seem to get stuck half-way through a sentence, give me a gentle tap on the head, and we’ll see if my nonsense was worth hearing in the first place. 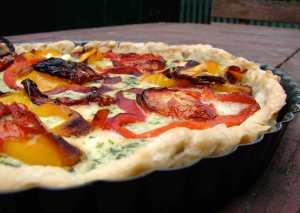 My friend Diane commissioned a dish for mother’s day. She wanted a vegetable side dish, and somehow I got the impression she wanted it to be substantial enough that any vegetarian guests could call it a meal. So, of course, I made a tart. It’s loaded with vegetables, and with colors and flavors. I had to make it a couple of days early, so I roasted the peppers and tomatoes, and dried them out in the oven a bit, so that they wouldn’t turn the tart too mushy. I think it worked well! (I made one for us, too, to be sure it was tasty, and I’m glad to report that it was!)

Here’s Belle and Sebastian’s Get Me Away from Here I’m Dying because he says, “Oh, that wasn’t what I meant to say at all,” which is such a lovely thing to hear in a pop song!

END_OF_DOCUMENT_TOKEN_TO_BE_REPLACED

I’ve been in a little bit of a blue funk lately, and I couldn’t start to tell you why. It’s inexplicable! The other morning I was lying in bed, trying to think of a good reason to get out of it, and I heard birds singing outside my window. I heard birds whirring and calling and warbling. It wasn’t a particularly nice morning, it was grey and unseasonably cool, but the sun came up a little earlier than it had the day before, as it does this time of year. The birds seemed to recognize that fact and want to sing about it. The birds and bugs and flowers just get on with their work, they go about their business. They wake up and live because that’s what they do in the spring. Maybe they think about time passing. Maybe they’re bewildered by memories and worries, but it doesn’t seem to slow them down any. As the days grow longer and lighter, they work harder and louder, and they seem satisfied with that. They seem happy. It felt like a comfort to me, listening to the birds busy outside my window. It felt like a good reason to get out of bed and get on with my life, and join the cool bright world waking up all around me, at its own irrepressible pace. You can never hold back spring.

This is what we made for easter dinner. It’s modeled on a bakewell tart, so you’ve got your crust, your jammy layer (pureed asparagus and tarragon!), and your baked nut custard layer (with macadamia nuts!). I added lemon zest and pepper to the crust, because both those things go well with asparagus and seemed fresh and springlike. Other than that, we kept it really simple and clean. I thought it was very tasty – bright but comforting.

Here’s Tom Waits with You Can Never Hold Back Spring. Remember everything that spring can bring.
END_OF_DOCUMENT_TOKEN_TO_BE_REPLACED