Malcolm’s teachers talk about making “smart choices.” It’s something he needs to work on. Because I’m a terrible parent, the phrase seems to have lodged itself in my head as something almost funny, and I find myself using it in less-than-serious situations. I had to have a talk with Clio because she doesn’t make smart choices in the throes of separation anxiety, and she’s become a danger to herself and our furniture. (I’d like to state for the record, before I continue, that I agree with his teachers that “making smart choices” is something Malcolm needs to work on (as do we all!), and I respect their efforts to remind him of that!) I worry a little bit for him, because he’s my son, and I have a lifelong history of crippling indecision and poor choices. Why would a person drop out of Oxford a third of the way through? Why would a person apply to film school, get in, and then not go? Why would a person waste time and money on a second independent feature when the first was a big failure? Why would they do it? Although on paper it may seem that I have made dumb choices, I have no regrets. I think it’s impossible to harbor regrets once you’ve had children, because every single decision that you ever made your entire life–massive or minute, important or seemingly inconsequential–resulted in their creation. It boggles my easily boggled mind! It makes a person think about fate! I believe in fate in the sense that it’s the same thing as history looked at from the other end. Once something has happened, it was obviously meant to happen and it becomes part of the pattern that connects one life to every other life on the planet, as we all move inexorably in the same direction. But I also believe that we control our fate, at least in part, by the smart and dumb choices that we make. And we determine the quality of our lives, as we’re swept along on our fateful journey, by these choices as well. I’m fascinated by the word “fate,” which is closely related to the word “faith,” and to the words “fay” and “fey.” I’m comfortable with the idea that whatever we think about fate, generally, and our own fate, specifically, we have to understand that we’ll never fully understand it, and we have to accept that we’re frequently powerless to control it, as it rolls ceaselessly over us. I also believe that what may seem like a dumb choice if you’re looking at your life from a certain angle at a certain time, might seem like the smartest possible choice looked at any other way. (Hence the lifetime of indecision!) Although small choices have always rendered me a useless mass of anxiety, as I look back on my life I realize that the big choices, like being with David, were simple. There was only one option, only one wise choice. That feels like fate! That gives me faith! And I have faith that Malcolm will make good choices. They might not always be smart and practical choices, but they’ll be brave choices, and (hopefully) kind choices. 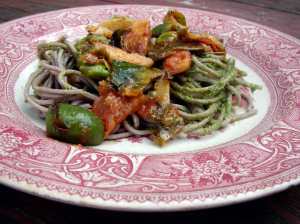 Malcolm loves soba noodles. He gets very excited about them. He likes them plain, with tamari, so that’s how we most frequently eat them. This week, I decided to augment their sweetly savory nuttiness with a pesto made from pecans and nutty arugula. I added some smoked gouda, because I thought that would be nice, too. And it was! The pesto also has a bit of sage and honey, to balance the sharp strong flavors. Brussels sprouts and castelvetrano olives are pretty together. They’re so GREEN! And this pesto was very GREEN! This whole meal had a solid-earthy-wintery-melting-into-summmery flavor. If you know what I mean.

Here’s Once in a Lifetime by The Talking Heads, because it seems to fit!