Sometimes when we have trouble making a decision we’ll ask Malcolm for help. Usually it’s a small thing–choosing between two paint colors, say, or whether or not I should add olives to a stew. He’s very decisive, but he’s thoughtful, too–he thinks quickly. And when he gives an answer it always seems to have been the obvious answer all along. It sounds silly, but I’ve been wracked with indecision lately on the subject of a story I’m writing. It was going along in the usual halting, stumbling way of most of my stories, when I noticed that it kept getting longer and longer. The characters were in my thoughts all day and night, and they were becoming more complicated, and all of these ideas about what things could be about started haunting me. I know you’re supposed to write something until it’s as long as it needs to be, but at some point you have to decide what you’re doing, you have to know where you’re going and have some idea how to get there. So I asked Malcolm. I was mostly joking, but I said, “Hey, Malcolm, should I write a short story or a novel?” I was thinking he’d just laugh it off, because it’s a ridiculous question. But he said, “Well, tell me about it, tell me about some of the characters, what’s it about?” This kills me! It’s so smart and sweet. And Malcolm had an idea for a story, too, which I’m going to help him write by asking him questions, so we were just like two writers, together, just a couple of story-writing friends, discussing our work. And I’ve decided to think like Malcolm, when I’m choosing if the story goes this way or that way…I’ll think quickly, and make it seem like it was inevitable all along. He chose novel, by the way, so we’ll see how that goes! 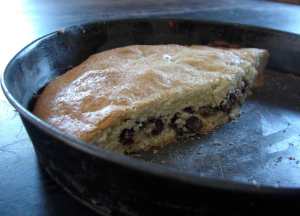 It’s a pastry cake! I’m very excited about this…I feel like I’ve invented a genre of sweet food. I first encountered the phrase “Pastry Cake” in one of my favorite books, Joan Aiken’s Go Saddle the Sea. I couldn’t find an actual pastry cake any where, so I decided it should be a thick dense cake, almost like a soft shortbread. The first one I made had a salted top. This one has clementine zest in the batter, plus almonds and a pinch of allspice and a drop of sherry. It’s stuffed with milk chocolate chips, and topped with sugar crystals, which gives it a nice sort of crispiness. Very festive, very tasty!

Here’s The Choice is Yours by Black Sheep
END_OF_DOCUMENT_TOKEN_TO_BE_REPLACED

In my dream this morning, I made a film. I haven’t made a film in nearly thirteen years, and like all neglected things, films frequently work their way into my dreams. Unlike most forsaken activities, my dream films aren’t the source of anxiety. They don’t appear as starving pets I’ve forgotten to feed, or children I’ve abandoned somewhere, or tests I haven’t studied for. My dream films are perfect. They’re strange, of course, because they follow a dream logic, which makes them odder and better than surreal films, which are frequently too carefully calculated to be very honest or beautiful. My films look exactly the way I want them to look, each frame so lovely it’s sealed in glass. And they say exactly what I want them to say. In real life I don’t have anything interesting to say, but I never stop talking (you may have noticed!). In my films I have a perfect thing to say, and I say it perfectly, with grace and space and spirit. In my dreams, my films are never finished, but a large portion is done, and done well, and frequently I have an epiphany on just how I’ll finish it. It’s good to wake from these dreams – I wake happy, but a little disappointed, of course, because there is no film. We saw Sleepwalk with Me last night, and the main character says this, “I really feel like our whole lives, no matter how low our self esteem gets, there’s a part of us that thinks, ‘I have a secret, special skill that no one knows about.'” Well, I know what he means. I remember in high school having this talk with a friend. She was sure, she knew without a doubt, but in a way that she couldn’t even talk about, she knew that one day she’d be a successful musician. And I knew that one day I’d be a writer, a good and important writer. I’d write novels or plays, and they’d be beautiful and everyone would like them. And I’d make films, too. Perfect films. Don’t laugh, but when I was in my twenties, working on my first film, I was walking down the street feeling good. I had bright red nail polish on, and I remember imagining the New York Times reporter who was interviewing me – you know, the one who was interviewing me because of my brilliantly received film – I imagined her mentioning my bright red nail polish. I’m just not so sure any more, about having the special secret skill, but I guess my sleeping brain thinks I do. I wonder when you lose that faith in yourself. I’ve started novels, and been in a passion of hopefulness about them, only to find myself one day holding reams of paper that suddenly feel like wasted paper, with wasted words representing many wasted hours. And my films took about three years each, start to finish, but I was in love with them the whole time. You have to be! And now I watch them, I see where they’re flawed. At times that’s all I can see. It can leave you feeling very discouraged! Very scared to try! I hope nobody tells my dream self! And thank god for my boys, because they don’t have just one secret special skill, they have every skill in the whole world! They can be anything they want and they’re going to be wonderful at whatever they try. 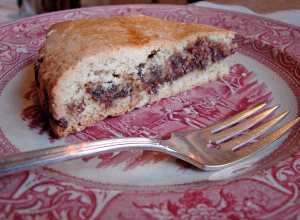 Last week I mentioned Joan Aiken’s Go Saddle the Sea, and I quoted a passage in which she mentioned a pastry cake with salt sprinkled on top. Well! That image, of a pastry cake with salt sprinkled on top, has haunted me ever since. What is a pastry cake? I can’t find a recipe for one anywhere. Is it pastry or is it cake? I could just see it! I could just taste it! So I decided to make it. I made a pastry type of dough, with mostly butter and flour, but I added an egg and some vanilla and leavening. Then I rolled it into thin layers, stacked on top of one another, to give it an airiness of sorts (I hoped). Then I made a filling of ground almonds, bittersweet chocolate, cinnamon and sweetened condensed milk, because I thought it would be nice and dark and spicy and caramelly, and go well with the salty top. I was so pleased with this stupid cake. I took it out of the oven and it was love at first scent. It smelled sweet and complicated. It has a pleasant weight, but felt a bit hollow, too, which was a good sign because I was worried it wouldn’t have cooked all the way through and would be damp and unpleasant. I waited a while to cut into it, in a fever of anticipation and worry. It’s lovely! It’s like a big cookie with a wonderful filling, and a top crusty with sparkling sugar and salt. I’m very happy about it!

Here’s Darn That Dream by Billie Holiday, which I used in one of my first short films.