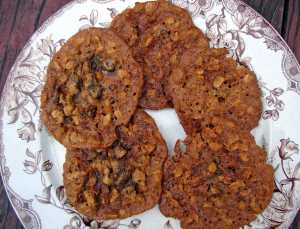 Happy birthday, Robert Burns! Surely Burns is another ordinary poet laureate. Born in poverty, mostly self-educated, called “the ploughman poet,” Burns wrote about lice and mice and love and revolution. His poems are simple, honest and direct, but full of music in their words and rhythms. He collected Scottish folk songs, and adapted these as poetry, and adapted his poems as songs. He spoke of the value of simple things and honesty over dissemblance and finery…

And he prayed for a time when, the world over, we’d recognize the value of sense and worth, and me would live as equals, as brothers.

One of my favorites, which makes me like Burns so much, is To a Mouse, on Turning Up Her Nest With a Plough, November 1785. It’s so sweet and specific, so compassionate and thoughtful, a gentle reflection on the value of all life, the universal anxiety of surviving winter’s hardships, and on memory and anticipation, as well. (But do mice remember? Do they look ahead? They might! We’d never know!)

I doubt na, whyles, but thou may thieve;
What then? poor beastie, thou maun live!
A daimen icker in a thrave
‘S a sma’ request;
I’ll get a blessin wi’ the lave,
An’ never miss’t.

Thy wee-bit housie, too, in ruin!
It’s silly wa’s the win’s are strewin!
An’ naething, now, to big a new ane,
O’ foggage green!
An’ bleak December’s win’s ensuin,
Baith snell an’ keen!

Thou saw the fields laid bare an’ waste,
An’ weary winter comin fast,
An’ cozie here, beneath the blast,
Thou thought to dwell,
Till crash! the cruel coulter past
Out thro’ thy cell.

That wee bit heap o’ leaves an’ stibble,
Has cost thee monie a weary nibble!
Now thou’s turned out, for a’ thy trouble,
But house or hald,
To thole the winter’s sleety dribble,
An’ cranreuch cauld.

But Mousie, thou art no thy lane,
In proving foresight may be vain:
The best-laid schemes o’ mice an’ men
Gang aft agley,
An’ lea’e us nought but grief an’ pain,
For promis’d joy!

Still thou are blest, compared wi’ me!
The present only toucheth thee:
But och! I backward cast my e’e,
On prospects drear!
An’ forward, tho’ I canna see,
I guess an’ fear! 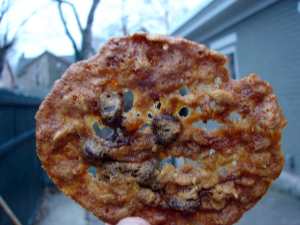 I’m not going to tell you about vegetarian haggis, because I did that last year. Instead, I’m going to tell you about these cookies. When I was making these cookies, I jokingly called them “Scottish cookies.” They’re not at all really. David’s grandparents are from Dundee and Motherwell, which makes Malcolm and Isaac Scottish, and when I want them to eat certain things, I’ll say, “You’re Scottish, you have to like it.” Amongst these things are oats and marmalade. Remember this joke?

An English man and a Scottish man are sitting in the pub and the English fellow is teasing the Scot: ‘Isn’t it funny that you Scottish people eat so much porridge and oats? We only feed that stuff to the horses!’ ‘Aye’ replies the Scot, ‘that’s why the English have the finest horses, and the Scottish have the strongest men.’

And, according to my understanding, golden syrup was invented by a Scot as well. So these cookies have all those things. (And the boys did like them, they liked them very much indeed!) The first two batches I made didn’t have enough flour, and I had to literally scrape them off the pan in one big, delicious, crumbled mess of oats and chocolate, all caramelized and crispy. (We ate it all!) Once I’d added a bit more flour, the cookies held together better. They’re still light and crisp and lacy, and you have to let them sit for a minute before you take them off the sheet, and they’re absolutely delicious. They have a real caramelly, toffeeish quality. 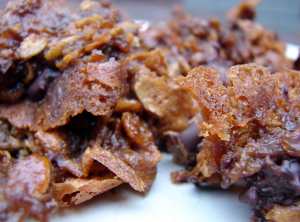