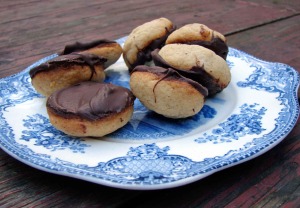 I like to read the end of a book first. I’ll read the last couple of pages first, and then I’ll go back to the beginning. I like to re-read books, too, especially books with happy endings. For a lot of people, knowing how it’s going to end spoils the enjoyment. Not for me. It’s hard to explain what a keen pleasure it is to know what’s going to happen, and to follow the characters as they make their way towards it. I suppose it’s like a child wanting the same book read over and over, until the words are almost memorized, until they can correct you if you leave out a sentence or read something in the wrong order. My boys will watch the same movies again and again, eagerly anticipating their favorite parts. It’s strange how something familiar can seem so new and suspenseful. Isaac will run out of the room at the same scary parts, even though he knows the movie has a happy ending. When I was younger I wanted to know how my life would go, too. Not how it would end, but what would happen along the way. I read horoscopes and when I found three pennies I’d throw i Ching, the book of changes. I don’t any more, though. Everything is going so fast as it is, we’ll know soon enough. And I’m caught up in the days, as they roll into each other, in so many ways all the same, but each full of a million little changes and surprises.

These cookies are like malted milk balls, but way better! They’re so good. They’re very addictive. They’re soft and cakey but they have a little bit of crunch. And they have chocolate!! The taste of malt and cinnamon is so soothing, to me. These are the ultimate comfort cookie.

Here’s Tom Waits with How’s it Going to End.