Malcolm yelled “Good luck!” to the bald eagle. Before work on Sunday, the first and only really lovely spring day this year, Malcolm and Clio and I went for a “run.” It was more of a fast walk, because he’d just eaten pancakes, but that suited me exactly. We came to the place where a bald eagle had built a nest across the canal. A big, random-looking pile of sticks on the top of a huge metal tower.

The tower last year, before the nest was built. What are these things called?

I hadn’t actually seen an eagle there, but I stopped to look every time we passed. This time I saw a big hulking bird farther down the tower, and I asked Malcolm if it had a white head, because I couldn’t see that far, and it could have been a vulture. It did! It did have a white head! We walked back on the other side of the canal, to get a closer look. Malcolm was talking cheerfully about his schemes for the future, and I was thinking how good it felt to go for a walk with him again, and hear his zany chatter, after a long, shut-in winter. When we got to the tower, the eagle was gone, but we stood for a moment looking up into the bright blue sky. You could feel the earth getting warmer all around us, waking up and coming to life. And then the eagle flew up out of the river, and landed very low on the tower, where we could see it perfectly. It was a stunning moment, it’s not an exaggeration to say that it felt as if my heart soared up with the eagle. We watched it for a while, sitting there so beautiful and impossibly large and completely cool, and then Malcolm yelled, “Good luck,” and we walked home. It felt so sunny, to hear him say that, to think about Malcolm encouraging this huge unruffled raptor. It seems so precarious to try to raise chicks on the top of a tower that holds power lines, in a world full of people, it feels like such a hopeful thing to do. I’ve been feeling vaguely anxious lately about equally vague events that may-or-may not happen. Worried about the future more than usual, troubled by time passing though I know there’s not a damn thing I can do about it. It feels good to take a walk, and see the eagles and the geese sitting on their nests in the sunshine, everybody is doing what they have to do, getting on with their lives, waking with the spring. Isaac recently showed me the sign for “All you need.” You hold your hands together in front of you, and then spread them to your sides. It’s a beautiful gesture, particularly as performed by a serious eight-year-old. It seems like a good gesture to make when you’re feeling anxious, to remind yourself of what you have, and that all you can do is what you have to do, and try feel good about what you’re working on and where you’re going. It’s a gesture like spreading wings in the sunshine.

Isaac likes crostini. I made these last week after he’d been sick for a few days and eaten nothing but toast. These were like a step up from toast, and Isaac ate quite a few. The sauce itself is inspired by romesco sauce, and it’s sweet smoky nuttiness goes well with the sharp saltiness of capers and olives. It made a nice meal with a big salad.

Here’s All I Need by Radiohead.
END_OF_DOCUMENT_TOKEN_TO_BE_REPLACED 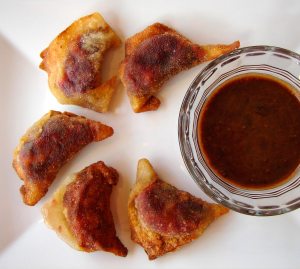 I’ve always loved stories (usually children’s stories, but you sometimes find it in Dickens as well) in which a character is subjected to terrible cold and hunger and discomfort, but somehow finds themself, in the next scene, basking in humble fireside warmth and nice things to eat. On our spring break, we went into the mountains. We went for a hike, despite the chilliness, and the predictions of rain or even snow. We were in a place we’d been before, and the paths always wound back to the beginning. They were all only a mile long. We could do that! Isaac got tired and wanted to turn around. The weather worsened. We thought – we’re in a loop, if we turn now, we would have been minutes from the beginning. So we trudged on. Finally we came to a map. The woods chilled and quieted, and a cold pelting hail rained down with purpose. The map said, “Congratulations! You’ve reached the end of this trail. Now turn around and trudge back the miserable 1 and half miles, with a tired 6-year-old and a 9 year-old who has twisted his ankle.” It was an oddly panicky moment! One of those, “who said I could be a mom, because moms are supposed to know exactly where you’re going and how to get there” moments. But we walked back, and for five minutes the sun came out, and it was nice talking to the boys while we walked. We got to one spot where somebody had obviously made a campfire. The dirt was wet and sweet, and the charred wood was equally fragrant. Don’t think I’m crazy, but it really made me want to eat beets!! Then the hail came back, and we were so grateful to see the end of the trail, and go back to David’s mom’s lovely cabin and sit in dry warm pjs by the fireside!

Beets are sweet! And beautiful! And so tasty! I can’t believe I ever thought I didn’t like them. They’re combined here with capers (or flavor dynamites, as they’re known in my family). The tart savory brininess of the capers is a nice relief from the earthy sweetness of the beets. The beets are grated and toasted, and they have a lovely, charred-sugar flavor, and an almost juicy texture. All of this is tucked inside a wonton wrapper (they’re so much fun!) and then quickly fried in olive oil. Making for a perfect little crispy pouch of juicy deliciousness. We had these as a meal with a big salad, but I think they’d be a fun appetizer or snack for a party with a bowl of delicious dipping sauce alongside.

What is that delicious dipping sauce, you ask? Well, it is rich and savory, made with port wine, balsamic, fresh sage, and shallots. It’s a bit like a beurre rouge, but it has a lot less butter in it.

Here’s Down the Dirt Road Blues by Charley Patton. Wonder if he was craving beets as well?