“Did you ever beam in Clio’s eyes?”
“Beam in her eyes? You mean shine a light in them?”
“No, you know, beam in them, you just look right in her face.”
“I suppose…”
“Hagrid and Dumbledore do it all the time.”
“They beam in people’s faces?”
“No, they just beam around. They’re always beaming around.”

At this point in the conversation it became obvious that Isaac was talking about a word Rowling frequently uses to describe an affectionate smile. But before that moment of comprehension, when I was in my early morning daze and enjoying the feeling of charmed confusion that Isaac’s observations often provoke, I had such a different picture of beaming. Just last week I wrote this sentence in these very virtual pages,
“I love to think about people having a light inside them, even being that light. I believe that this is something that every creature has, and as we grow and become jaded and mature, we learn to hide our light, we become closed and dark and careful. You can see it in dogs and children, though, everything they feel comes beaming out of them, unfiltered, unshaded, so bright and powerful you can warm yourself in their glow.” So as I pictured it in my mind, if you beam in someone’s eyes, you shed all the light and warmth of your love and spirit in their direction. You send all the glow of your hope and grace towards them. And probably they’re ignited by your beam, you help to kindle their beam, and then you have mingling beams, which flame higher and brighter than one beam alone. You’re a beamer, and now they’re a beamer, too. If ever I met a beamer, it’s our Isaac. From when he was very tiny, he would smile at people, even at complete strangers, and you could tell that their whole world had brightened perceptibly. He’s always beaming around, that Isaac. I’ve been feeling discouraged today, but I keep thinking about beaming. I keep thinking about people all over the world working so hard and hopefully, just to stay alive, to get by, to get ahead, to make something good; and about all of the rejection and discouragement that casts a dark shadow over everybody. And then I think about all of the beaming going on, all of the beamers in the world, spreading their lights around, breaking through the clouds with great rays and flashes of light. “For beamers came from around and counforted her, beaming that place of darkenesse wyth unspeakable cleernesse.” After all, we all have our own light, we’re all beamers. 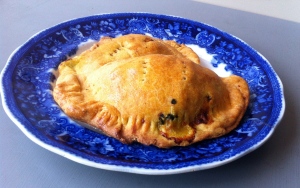 These empanadas have a sort of golden glowing theme to them. Pretty golden beets, plump golden raisins, warm golden-brown crust. They’re a little sweet because of the raisins and beets, but they have earthy beet greens and spinach and delicious crunchy pistachios to set that off. They’re tender on the inside and nice and crunchy outside, because they have a little cornmeal in their crust. I grated the beets before I roasted them, which gives them a nice soft/crispy texture and a perfect roasty taste. My golden beets were tiny, so I decided to add some grated carrots to the roasting pan, which went nicely with everything.

Here’s Parliament with Flashlight. Everybody’s got a little light under the sun.