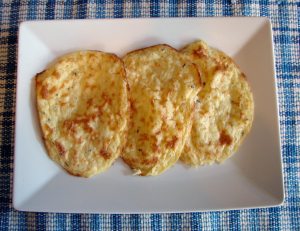 In a blatant attempt to pander to the southern vote, I decided to make something with cheese grits, y’all. Actually, I cannot tell a lie, it has nothing to do with that. I’m not even running for president! Shocking, I know! The truth is, I like to make recipes inspired by songs, and one of my favorite songs is RZA’s Grits. I find it beautiful on so many levels! It remembers a childhood of poverty, of grits for dinner every night. It’s affectionate and honest, and, it’s so pretty!

I’ve had grits a few times, and, to be honest, I haven’t loved them. They’ve been stodgy and tasteless. So I wanted to do something a little different with them. But nothing crazy fancy, I wanted to keep it simple! So I used half milk/half water to make them, and I steeped this mixture with some aromatics as it was warming. Once the grits were cooked, I added eggs and cheese, and then I chilled the mixture for a while, because I had to get the boys from school!

These turned out really nice. They were so far from stodgy that they were almost delicate. A little crispy on the outside, but with a nice, soft, flavorful and comforting interior. We ate them with a red lentil cashew curry, which I’ll probably tell you about later. But they would make a nice meal with some greens, potatoes, and maybe a fresh tomato sauce, or some beans. Anything, really! And I think they’re gluten free.

Here’s RZA with Grits. (I like the video, too!)
END_OF_DOCUMENT_TOKEN_TO_BE_REPLACED