Malcolm wore flannel pajamas under his trousers all winter long. Why did he do it? He has his reasons! Was it for warmth? for comfort? for a sense of extra security? Out of laziness? Was it a nouveau-grunge look? (Grunge is more than a stylistic choice for Malcolm, it’s a way of life, and if you doubt his devotion to the cause, look at his fingernails.) These last few days, the unseasonably cool weather has given way with complete submission to the unseasonably warm weather. No peaceful transition of balmy spring-like days. Cold to hot, just like that. We took a walk after dinner one evening, and we were all a little overdressed and a little warm, and none more so than malcolm, with flannel pjs inside of his flannel-lined trousers. We said, “Are you really still…?” He said, in a sweetly funny, sighing voice, “I regret it.” And, of course, this got me thinking about Malcolm and regrets. It really seems as if children have no regrets – my children anyway! Perhaps they’re prodigiously lacking in compunction, but it seems as if their friends are just the same. And this is yet one more way that I wish I was more like them. I feel as though I live my life under the weight of a vast network of regrets. They cling to me like spider webs as I pass through my days. They seem silly, but they add up, and they slow me down. Why did I have that last cup of coffee when my heart already feels like it’s going to explode? Why did I have that last glass of wine when my head feels as if it’s going to explode? Why did I say what was on my mind when I knew nobody wanted to hear it? Why was I so snappish with Isaac when he hadn’t really done anything bad? Why did I curse angrily in front of Malcolm when I know it makes him sad? And on and on it goes. Sometimes, I’ll have a faint hint of uneasiness, a nagging feeling that I’d done or said something regrettable, and in trying to unravel that one string, I’ll pull on a million others, so I can feel my heart sinking over something foolish I said decades ago. But my boys aren’t like that. They move right on with their lives. They’re never angry for long, they’re not resentful. They don’t store up bitter feelings about something somebody else has done, and they do themselves the same favor. This makes them light of heart despite the fact that their hearts are endearingly full at all times. Sometimes they’re irritatingly on-with-the-next-thing. Sometimes I have to stop myself from shouting, “You just spilled a pint of juice on your homework! Show some remorse you little psychopath!!” I think I’ll try to be more like them. I think I’ll imagine myself throwing away my regrets the way the boys throw rocks into the water–joyously and wildly, never worrying about the splashes, never regretting the loss of the stones. 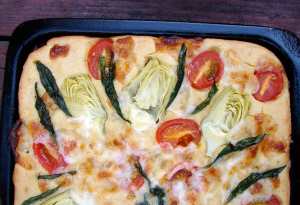 I thought this dinner turned out so pretty! I’m not even sure what to call it. I made a batter such as I might make for puffy socca or chickpea flour crepes. I cheat and add eggs and a bit of white flour, as you may recall, and this makes the batter lighter and easier to work with, whilst retaining the singular taste and texture of chickpea flour. So I did this, and then I arranged artichoke hearts, grape tomatoes, tarragon leaves and mozzarella cheese in a pretty pattern on the surface of the batter, and then I baked it! I thought it tasted very good! I love tarragon, but my boys were disconcerted by whole leaves of it, so you might want to chop it up. Or use rosemary or basil instead. Chickpea flour tends to result in a slightly dry texture, so we ate this with sauteed spinach, white beans, and black truffle butter. The combination was absolutely delicious!! You could eat it with any kind of soft sauteed vegetable or even a simple tomato sauce, though.