Last night was the school Halloween dance. Just a bunch of over-tired over-sugared kids who had lost half their costume running around like mad things, but strangely beautiful all the same. The younger grades went first, and played a manic dangerous game of tag through the smoke machine smoke and disco lights, with Thriller playing over and over in the background. And then the older kids took over the gym and played a more fraught game of tag, because social anxiety increases with every passing year. Some of the girls danced, but the boys raced around the edges, or walked around looking cool and handsome with their hands in their pockets (that’s my Malcolm, of course.) I was in charge of the pumpkin-pong game, the object of which is to bounce ping pong balls into plastic pumpkin buckets. I didn’t think there would be a lot of takers (Girls and boys and Thriller, what do they need pumpkin pong for?) But they loved it. And the ones that loved it really really loved it and came back time and time again. I became caught up in the excitement; I cheered when they got one in and I was disappointed for them when they didn’t. I was supposed to collect tickets for the game, but the whole exercise demonstrated my woeful inability to make money in real life. If they got one ball in, they got their ticket back, and they almost always got at least one ball in. They got a free turn if they helped me collect the balls that skittered away from the buckets. They got a few extra balls to pitch if they looked disappointed enough at the end of their turn. Toby asked if he could have a free turn because he was my neighbor, but I had to draw the line at that kind of political pandering…handing out favors to the constituents in my neighborhood! Where would the corruption end? (I gave him a free turn if he promised to get one in, which he did.) If you said to the kid, “You’re really good at this.” Or “You’ve got the best score yet.” The kid always came back to play again. This is either an easily exploited cynical ploy to get children hooked on gambling for life, or a testament to the power of encouragement. After all, they didn’t win anything except a chance to try again and a pat on the back from somebody else’s mother. But if they felt that they were good at it they wanted to try again, they wanted to be better at it. They wanted to practice and refine their technique. They weren’t worried about who was watching them, and if they had one bum turn, it was seen as a minor setback, a reason to try again and do better. It’s a lesson to us all, a pumpkin-pong life lesson. As you go about your day remember to say, “Good job, kid, you’re really good at this!” and give a nice big pat on the back to everyone you meet.

This is more of a serving suggestion than a recipe. You take some firm polenta stir in some cheese and herbs, let it set, slice it quite thin, coat with olive oil, and broil on both sides until crispy. Then you top it with whatever you like. I used mozzarella, black olives, fresh tomatoes and capers, but you could use pesto or red sauce or anything you like! 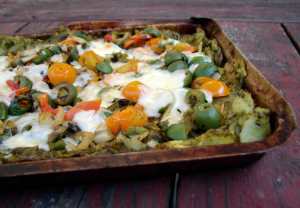 This is my 700th post! It boggles the mind! I should make it very clever and funny and memorable, but I’m not feeling very organized in my mind at the moment, so none of that is going to happen. Instead you’ll get a ramble from my melty brain, and it will start this way: “I’ve been thinking about this a lot lately…” As you may have noticed, I’ve been reading some Camus, specifically essays he wrote for Combat magazine as the second world war came to a close and the occupation ended. He’s so hopeful and passionate about starting fresh, about creating a new society, and he’s sorting through his ideas about politics, religion, violence, life and death. It’s an inspiring read, and it’s fascinating to see how his convictions change in response to the world around him. He starts one essay, “We are often asked: ‘what do you want?’ We like this question because it is direct. We must answer it with directness…by returning to the question again and again, we will give our answer clarity.” I love this about Camus! His answer is not entirely specific or practical, but it’s about justice and freedom and purity, and how those can probably never be achieved but they’re still worth fighting for. I’m not often asked “What do you want?” and I’m fine with that, because honestly I don’t want all that much, but I’ve been thinking about my defense of the ordinary, lately, and I have a lot of questions I return to again and again. For instance, I recently described the British kitchen sink films as Ordinary. They are about ordinary people, but they’re also about miserable people, who are trapped by an immoveable class system. And this is not something I would champion. I would not tell someone trapped in an unrewarding hopeless job, “Ah, just make the best of it and think interesting thoughts.” I would encourage them to make a change in their life, and I would hope they’d have the freedom and support to do so. But this is how the cycle continues…their new, more interesting job would become ordinary, and that would be a good thing. Because everybody lives day to day. You could have the most fabulous life imaginable, but you still live it one day at a time, you still move through it from meal to meal and sleep to sleep, from season to season: the sun still rises and sets on you. This is something we all share, and which we can’t escape. This passage through time, with it’s oddly variable, inevitable pace should join us in sympathy with everybody around us, because it makes us all equal, it makes us all Ordinary. But it also makes ordinariness unspeakably precious and not something we should feel stuck with, but something we should value and keep. I want to see a change in the world, I want to see a (peaceful) revolution that brings about the sort of justice in which everybody has the freedom to live their everyday life exactly as they would wish, with plenty and safety and inspiration. The tedious jobs should be shared by everybody, so that we all have the time to be creative and joyful. So that as we’re all stuck on this journey together at the same absurd pace, we all have a beautiful view out the window. Well, it’s 100 degrees and I’m probably not making sense, but by returning to the question again and again, we will give our answer clarity.

This is all from the farm! Potatoes, herbs, tomatoes, fennel. I wanted to put it all together with the smallest amount of heat possible. So I cut the tomatoes very thin and cooked them quickly. And I sauteed the fennel and herbs. But beyond that it’s all made (quickly) in the toaster oven. You could use the regular oven and broil it, and everything would be cooked in about ten minutes, so it wouldn’t be hot for very long. It’s kind of like a pizza, except that it’s gluten free! The boys liked it, and so did we.

Here’s Our House, by Madness, because somebody was listening to it as I walked down the street earlier, and I remembered how much I like it, and it’s very cheerfully about ordinary life.