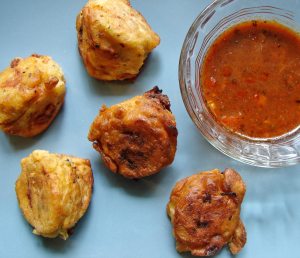 Somewhere in the last decade I lost the ability to put a sentence together in such a way that you could start at the beginning of it and find your way to the end with the sense still in tact. See? You’re scratching your head, you’re wondering what the hell I’m talking about! I don’t know! Words used to come easily. I could write a 10 page paper on feminist film theory in an afternoon. And it would be good! I don’t know what happened, exactly, but the ability to put words together slowly eroded, leaving me, confused and muttering, trying to explain my thoughts to anyone who would listen.

I feel like it’s been getting better, lately, though, because I’ve been exercising my sentence-forming-ability. Taking it out for short runs every day, and putting it through its paces. Nothing too strenuous or stressful, nothing too complicated. I took two days off, watched a lot of cartoons on cable, and I feel like it’s all gone again! Sheesh.

Anyway – I’m back, and we’re making crazy food here. These carrot cashew fritters were the product of a nearly empty fridge. We had some carrots, we had some tarragon I wanted to use up. We had some fresh ginger. Would that be good with tarragon? Yes! It would! I wanted to use chickpea flour, but either I used it up, or it got lost in some strange nether world of odd flours in my overburdened cupboard. Pushed to the back behind the toasted barley flour and the tapioca flour and the masa harina, it was all like, “I’m out of here! She doesn’t even know I’m around any more!” So I used urad flour, which imparted a nice earthy taste to the sweet bright carrots and ginger. But you could use chickpea flour or even just regular flour, if you don’t happen to have a cupboard spilling over with bags of strange flours. The secret surprise in these fritters is mozzarella cheese! It makes them fun to eat, when it gets all melty and delicious. We ate these with a tamarind-chipotle sauce that I made a little bit too hot, but which Malcolm liked anyway.

Here’s John Buddy Williams Band with Saturday Night Blowout, my absolute favorite song at the moment. Since words have failed me, we’re going with an instrumental. Doesn’t it prove that you don’t really need words to say what you’re feeling? It’s a whole conversation.
END_OF_DOCUMENT_TOKEN_TO_BE_REPLACED