In which Claire, who doesn’t speak french, bakes her way through a french cookbook from 1962. If you cast your memory back, you may recall that before hurricane Sandy and before the power outage and all that ensued, I was working on a little series we liked to call French-cake-a-week. And you may also recall that I’d gotten in the habit of introducing each cake by rambling on a bit about a French film. And of late the particular emphasis of these rambles seems to have been films made by French women, and in particular the pattern of establishing a new, different rhythm for films. These films consciously shift the emphasis of the narrative and the framing of shots from the traditional high drama “plot points,” to smaller, subtler moments – to the mundane and every day actions that create a truer story, and a more solid understanding of character. Perhaps the supreme example of this is found in Jeanne Dielman, 23 quai du Commerce, 1080 Bruxelles, which happens to be not French but Belgian. It was made in 1975 by Chantel Akerman. The film is three and a half hours long, and it shows three days in the life of Jeanne Dielman, a housewife and mother. We see her walking to the store, cleaning her house, peeling potatoes, making dinner. In a traditional film, these would be the actions that were never filmed, and the shots that were considered unworthy of inclusion. They become the focus of this film, and Akerman has said that she doesn’t believe a kiss or a car accident should be higher in the hierarchy of images than the washing up. Akerman shot these scenes in real time – in long, uncut takes – “…to avoid cutting the action in a hundred pieces, to avoid cutting the action in a hundred places, to look carefully and to be respectful. the framing was meant to respect her space, her, and her gestures within it.” It feels strange, at first, to watch this film and see these oddly intimate moments of a woman’s life, played out in the time each action demands, but it becomes pleasurable in a new way – you come to enjoy her quiet, careful movements, the rhythm of her actions is nearly hypnotic, the stillness of the shots is unexpectedly mesmerizing. Jeanne Dielman also happens to be a prostitute, taking one client each day to support herself and her son. Her relations with the clients is shown to be as routine and ritualized as all of the other tasks of her day – just part of her chores and her housework. Until the last day – but I won’t spoil it for you! The film is a masterpiece of slow, quiet attention to gesture and expression. You come to value each action, and to appreciate the time that it takes, and the steady effort. You recognize it, of course, from your own life…you know how long it takes to peel potatoes, and how tedious it is, but the action becomes beautiful and fraught with drama, as you learn to watch for each subtle shift in movement and expression.

And this cake is a subtle shift from the last that I wrote about, which was a quatre-quarts, or pound cake. This one is very similar, but it has ground almonds, which add their lovely and distinctive taste and texture. The cake is still very simple, and would make a nice base for a more complicated dessert – for trifle, or cream and fresh fruit, or a soaking of rum. I made this cake the day of the storm, and I ate it for breakfast when the power was out the next day. You can see all the leaves Sandy left on our picnic table!

Here’s Jeanne, by The Smiths, which happens to be a song about housework!
END_OF_DOCUMENT_TOKEN_TO_BE_REPLACED 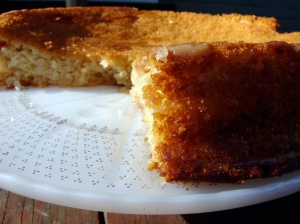 In which Claire, who doesn’t speak french, bakes her way through the cake section of a french cookbook from 1962.
Oh, how we laughed as we made this cake! We gathered in my immaculate kitchen, my perfectly obedient boys danced around me, singing songs about raspberries and strawberries in fluent french. Every stage of the process went perfectly, and we smiled as we popped the cake in the oven! We certainly didn’t curse the fact that we know french much less well than we thought. We certainly didn’t swear at google translate for making absurd suggestions as to the translations of french words. We didn’t frown anxiously as Malcolm said, “are you sure that’s the right amount?” We didn’t get called away from the dough at a critical moment, and leave it in Malcolm’s capable but unpredictable hands. We didn’t hear him say, “Ooh, t’s like play-doh!” as we left the room, and we didn’t think about the fact that when Malcolm plays with play-doh I generally have to peel it off the ceiling. We didn’t let it rest for an hour and then find a lump of stodgy dough with bits of dried yeast clinging to it. We didn’t add lots of other ingredients that didn’t mix in, only to find ourselves up to our elbows in a a sludgy mess. Certainly not!

I let Malcolm choose which cake to make by opening to a page in the book, and seeing which name he liked best. He chose the gateau savarin. It’s a yeasted cake with very little sugar, and then you pour a sugary, alcohol-laden syrup over, which soaks in and sweetens and flavors the whole thing. Kind of like a rum baba, really! If I was being perfectly honest, I would tell you that I had some trouble with this one. (Spoiler alert, it turned out very good in the end, and it was worth all the trouble, and I’m glad I didn’t give up half way through and throw the dough against the wall and stomp out of the house in a terrible temper, which, of course, I wasn’t tempted to do at all.) I have diagnosed my problem, and I think it’s because the yeast I used is the little packets of yeast granules, and I have no earthly idea what kind of yeast the recipe called for, but it certainly wasn’t the kind I used! My food processor saved the day, and with its noble help, I was able to pull everything together in the end. I’m going to give you instructions to make this the way I would make it with packets of yeast. It should all go smoothly from there. It’s supposed to be made in a ring-shaped mold, but I don’t have one, so I used a regular cake pan. Apparently you can use rum, kirsch or curacoa. I’d like to have used kirsch, but I don’t have any, so I used a bit of rum, a bit of cassis.