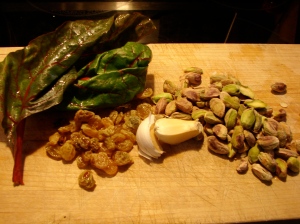 When I was in Spain quite a few years ago, I stopped at a place with only one vegetarian thing on the menu – spinach, raisins, and pine nuts. It was such a simple dish, and I had such a heaping mound of spinach on my plate, but somehow it was one of the most memorable and delicious meals I have ever eaten. The filling for this pie is loosely based on that memory. I used chard instead of spinach, because of the added depth of earthy flavor, and because it seems more substantial. And I added pistachios, quite frankly, because I had them! You could just as easily use spinach and pine nuts. The flavor would be different but equally delicious. I added lemon zest to this light yeasted crust, because I think the brightness of lemon zest contrasts nicely with the earthiness of the chard. 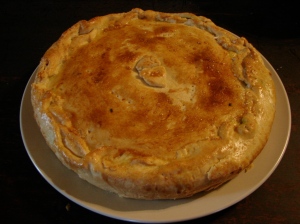 Here’s Swiss Chard, by Ed’s Redeeming Qualities, a band we used to listen to when we lived in Boston. I hadn’t thought about them in a while. Thank you, swiss chard, for reminding me!!

Recipe after the jump…
END_OF_DOCUMENT_TOKEN_TO_BE_REPLACED