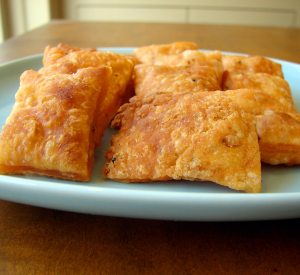 The boys were home all last week for spring break, bringing their own little whirlwind of boyish joy and drama. Do I look frazzled? We had a nice week, though. We went away for a few days, which we never do. And I got to go on lots of walks with Malcolm. He’s good to walk with because he talks and talks. You can just walk next to him and listen. He talks about how he gets all his best ideas right before bed, he wonders if I’d like yoshi from some game we don’t have, he thinks that everybody thinks that we’ll have flying cars some day, he had one lamb’s ear that we bought that died, and one he dug up that lived a long time till some kid at a party tipped it out of its pot. And he came up with the idea for these peppery crisps. He wanted them to be very spicy and very crispy. He wanted them to have lots of different kinds of pepper in them. Sweet red peppers, red pepper flakes, cayenne, black pepper, and smoked paprika. He wanted to make the red peppers themselves crispy, but I couldn’t think how we’d do that, so we made the roasted peppers into a puree, and mixed it into a sort of pastry dough. Then we rolled the dough out quite thin, cut them into diamonds, and fried them in olive oil. They got nice and puffy and crispy, and they didn’t take too much oil to make. Everybody loved them! Isaac ate them by the fistful (and he’s a hard boy to feed!). Malcolm was a little disappointed that they weren’t spicy enough, so we’ll up the red pepper flake content next time.

I made some ginger and basil red bean dip to go with them. Very quick to make and tasty. But they were quite flavorful all on their own!!