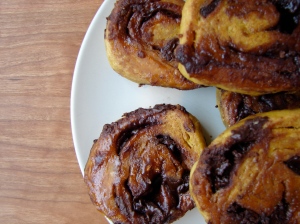 These cookies are oddly addictive. Well – chocolate and cinnamon – I guess it’s not that odd. But it’s more than that, I tell you! There’s something about the subtly sweet pumpkin cookie part, which shines through the more assertive flavors of cinnamon and chocolate, that makes you want more. 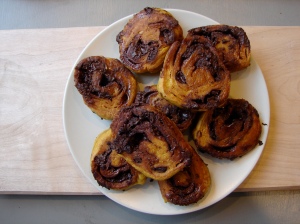 That, and, they’re spirals! With gooey cinnamon-y chocolate-y bits that you get to when you peel them apart. What could be more fun to eat than that? I should say, in the interest of full disclosure, I accidentally added too much pumpkin purée, which meant that I had to compensate by adding too much flour, which ultimately produced a very dense cookie. This recipe is adjusted to make a slightly lighter cookie, but it will still have that pumpkin pie-tenderness.
Here’s The Great Pumpkin Waltz performed by the Vince Guaraldi trio.
END_OF_DOCUMENT_TOKEN_TO_BE_REPLACED

What is it about cookies with a bit of chocolate that’s so comforting? When I lived in England, a cup of tea and a choccie biccie could cure almost any woe. In America, it’s chocolate chip cookies, which in my house we call “natural antidepressants.” There are a million ways to make them! You can make them fat and soft and cake-like. Or crispy and crumbly. You can add nuts, or oats, or fruit. You can use white chocolate chips or add butterscotch chips. I like mine thin and dark and intensely flavored – crispy on the outside and chewy on the inside. More like candy in some ways!

Here’s The Coup’s Wear Clean Draws. A tenuous connection, I know, but he calls his daughter his “cookie,” so this song has been in my head since I started thinking about cookies this morning. And I love it so much!