One of my favorite food-related scenes in movie history, is the moment when father and son go into a restaurant and share a bottle of wine and a mozzarella, in The Bicycle Thief. We recently watched Gigante, an Uruguayan/Argentinian film, that I promise to stop talking about soon. In one scene, our hero goes into a restaurant and orders pizza with mozzarella, a beer, and faina. First of all – it reminded me of that scene in Bicycle Thief to such an extent that I was sure it was a tribute to it. Second of all – what is a faina?!? I was so intrigued that I researched it the second the movie was over. Faina turns out to be a Uruguayan version of socca…a chickpea flour-based bread. It’s mixed with olive oil, herbs, sometimes parmesan, and tons and tons of pepper. And then it’s baked in a hot oven, till it’s crispy outside, though still dense and soft on the inside. And then it’s sliced and each slice is eaten on top of a slice of pizza. How strange but tasty does that sound!

I had to try it. I like making pizza anyway. It’s fun and easy and everybody in my family happily eats it, which is always a pleasure. I’ve been trying for some time to make pizza with a thinner, crispier crust – it had always eluded me. It worked this time, though…I used less yeast, more water and olive oil. The dough was quite sticky, but not hard to work with. I put lots of herbs in the dough, and I topped it with a roasted red pepper tomato sauce, dollops of goat cheese, and lots of fresh rosemary.

Here’s The Bouncing Souls with The Pizza Song. When I was in my early twenties I lived across the street from these fellows, and they lived a few doors down from the legendary Tata’s Pizza. Is that what they’re singing about here? We’ll never know.
END_OF_DOCUMENT_TOKEN_TO_BE_REPLACED 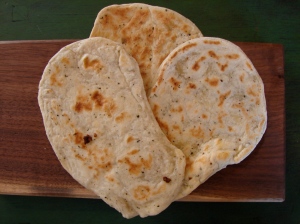 This recipe isn’t completely authentic – it involves more butter than any I’ve seen in a cookbook – but it is fun to make and good to eat! The basic recipe, as I make it, is similar to a simple pastry dough, with yogurt added at the end instead of ice water. And the whole process is not as icy and distant. You knead the dough for a few minutes, but it’s a very enjoyable dough to knead – soft but not too sticky. I added basil and black pepper, because I like basil with curry spices (we ate it with a cashew butternut squash curry and leftover kofta). The basil smells wonderful while these are cooking! I cooked them on a hot griddle, and then put them under the broiler to puff a bit, and then kept them in a warm oven till I was ready for them. They’re nice toasted the next day, too – they get crispy.

Here’s K’naan’s ABCs. Because it’s a brilliant song, and because my son just got his first headphones, and it’s the sweetest thing in the world to hear him sing along to this song.
END_OF_DOCUMENT_TOKEN_TO_BE_REPLACED