Spinach and beans on toast

I’ve spent quite a bit of time on hold, today. We’re switching to a cable internet connection. Apparently, this makes everything work much faster, so you have plenty of extra time to remain on hold with the cable company. But did I waste my time? Oh no, I did not! I watched videos of Elizabeth Cotten playing guitar and banjo. My god, she kills me! Here is her story as briefly paraphrased from the brief paraphrasing that is wikipedia. She was born in 1895 in North Carolina to a musical family. She played her brother’s banjo, and when when she was still very little, she took a job as a maid in order to buy herself a guitar. She and her brother would watch the freight trains run by their house on a single track while they chopped wood and drew up water. And they would sing as they worked. Elizabeth started writing songs, including Freight Train, probably her best known song. At thirteen Elizabeth began working full-time as a maid. At fifteen she was married, and shortly thereafter she had a daughter. She gave up the guitar, and didn’t play for twenty-five years. When her daughter was married, Elizabeth divorced her husband. She worked briefly in a department store. While there, she helped a lost child find her mother. That child was Penny Seeger, of the Seeger Seegers, the famous musical family. They took her home as a maid. She played one of their guitars, learned to play again almost from scratch, was recorded by Mike Seeger, and went on to perform with him, and become quite well-known in the circle of the folk song world. Elizabeth Cotten is left-handed, so she plays guitar and banjo upside down, plucking out the melody with her thumb. This is so remarkable to me! When she plays it sometimes sounds as if two guitars are playing at once. But she’s playing with two fingers! She taught herself to play, she turned everything upside down, and she made something sweeter and more beautiful than anything I’ve heard “correctly” played.

I found this video of her playing and talking. I guess it was made in 1978, and it seems as though it was shot on 16 mm, and roughly edited. I love everything about it. I love the darkness, and the silences around her playing, when she just sits and waits. I love the stories she tells. I like to think about her life, which seems so strange and important, and which I can only get a sideways, glancing picture of in my mind.

I made a loaf of bread the other day, with ground toasted oats, honey, black pepper and a pinch of nutmeg. I made the dough very soft and wet, so that the bread had a wide open crumb, kind of like a crumpet. I think it turned out very good. The flavor is subtle, you taste the honey, but the pepper and nutmeg are only hinted at. One night when I came home from work, I wanted a quick and comforting meal, so I sauteed some spinach and white beans and spread them on toast made from my oatmeal bread. I melted some cheese on my toast, too. This is sort of inspired by beans on toast and creamed spinach on toast. That’s a thing, right? 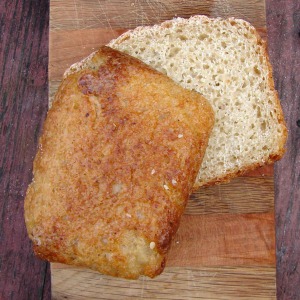 Here’s a link to an Elizabeth Cotten album on spotify, I hope.