I can’t stop listening to the same three Nina Simone songs! As soon as they’re over, I go back and listen to them all again. It’s not just that I love them, but I feel as though I need to hear them. They happen to be the first three songs on our new album…My Baby Just Cares For Me, I Wish I Knew How it Would Feel to be Free, and Ain’t Got No…I Got Life. I’ve been in such a strange mood, lately, and something about the strength and frailty of these, the doubt and joyousness, just feel perfect to me right now. And the boys have started liking them, so they ask to hear them over and over. It’s gotten to the point that the songs are stuck in my head (and David’s too!) all night long. They’re taking over! I feel as though I need to listen to something else for a while. This isn’t the first time this has happened…when the boys were little and I was feeling old and tired, I discovered the Arctic Monkeys, and played their albums till the songs wore a hole in my head. When I was in my twenties, I became obsessed with Old blues guys and Tom Waits, who has always sounded like an old guy. I think I needed some weight and gravity in my life, and I played these songs until I was in a blue mood, but it always made me feel better somehow. So this week’s playlist is songs that go beyond earworms to take over your life. Not just a pleasant song that gets stuck in your head, but songs you need to hear over and over and over and over. Does anyone else do this? Can you remember songs from various points in your life that have meant a lot to you at that time? That you listened to as you lay in awe on the bedroom floor? As ever, I’ve made the playlist collaborative, so add what you like, or leave a comment and I’ll add it. 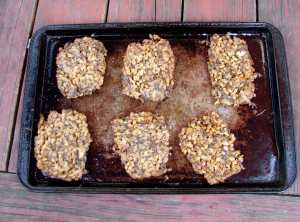 We had some leftover farro, so I decided to make farro croquettes. I used small, sharp asian turnips from the CSA and roasted mushrooms. This was very loosely based on something called “turnip paste,” I think, which is boiled turnips mixed with shitake mushrooms, steamed, sliced and fried. Someday I’ll try to make the real thing. The flavors were nice here…roasty, nutty, with just a bit of edge from the turnips.

Here’s your link to the collaborative playlist.