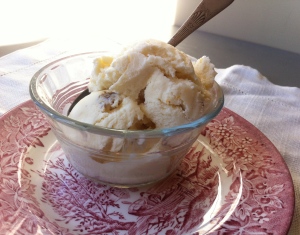 In September 1956, Life Magazine published a Photo Essay called The Restraints: Open and Hidden. The photographs, by Gordon Parks, show the everyday comings and goings of an extended family in rural Alabama: A woman holding her great grandchild, children playing by a giant tree, an elderly couple posing for a portrait, people outside of stores or in their homes. These are civil rights-era photographs, and they’re like nothing I’ve ever seen. The images of this era that I’m familiar with, some of them taken by Parks himself, are black and white, and they’re full of drama and tension and import. They show great men and women doing great things. Park’s pictures for this photo essay are in color and they show ordinary people doing ordinary things. They’re glowingly beautiful, vibrantly pretty. They’re almost defiantly colorful. You can almost imagine a world in which “colored only” didn’t refer to a hateful and demeaning discriminatory practice but to the flowers on a little girl’s dress. I suppose it’s easier to understand a historical situation, to empathize with people that lived in another time and another place if we relate to them. Looking at these pictures we’re reminded of our grandparents, our parents, our children or ourselves as children. 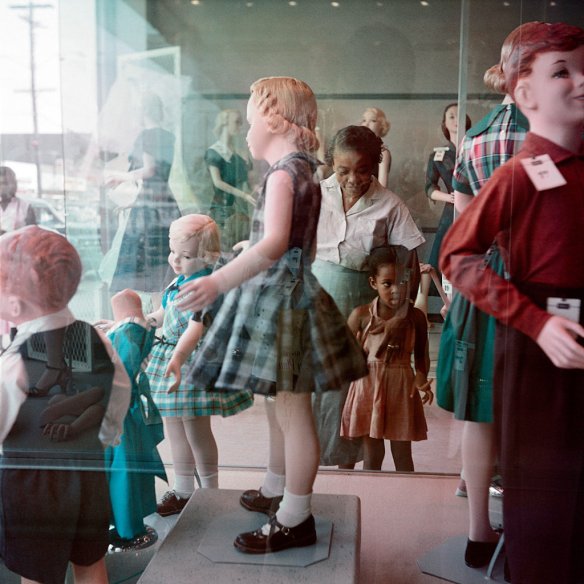 The way Parks presents his subjects, with so much affection and clarity, we feel that we love them, and this brings home the realities of fear and injustice in a new and powerful manner. We see people struggling for things that we take for granted every day … the right to have an ordinary life, and to carry on with the beautifully mundane littleness of every day without dread or worry. Right down to posing for a picture. From The New York Times photo blog, LENS,

“Mrs. Causey, a teacher in a ramshackle one-room schoolhouse in Shady Grove, Ala., was quoted in the piece as advocating integration as “the only way through which Negroes will receive justice.” One of the most outspoken members of the Thornton family, she helped to organize voter drives and teach community members the Bill of Rights, the recital of which from memory was a prerequisite for African-Americans to vote in many Southern states.

As Life later reported, Mrs. Causey’s candor and activism infuriated white supremacists, who taunted the couple about their participation in the photo essay. Service stations refused to sell gas to Mr. Causey, a woodcutter and farmer. He was soon accused of owing money on his truck, which was seized by alleged creditors. Without it, he was unable to work. Two weeks after the photo essay was published, Mrs. Causey was fired from her teaching job. Unable to make a living and fearing for their safety, the couple moved out of Alabama.”

Joanne Wilson was another of Parks’ subjects, and she and her family thought the project was worth it, despite the risks, and they understood the very deep importance of their participation. “My family saw the photo essay as an opportunity to advance the cause of civil rights,” said Michael Wilson, Mrs. Wilson’s son and the family historian. “These pictures were going to be published in a national magazine. People across the country would clearly see the problem. They could see our plight. Maybe then we could get help.” It’s a brave and hopeful act. And the career of Gordon Parks was a remarkable one. He wrote poetry, painted, wrote symphonies, choreographed ballets and made films. He directed Shaft! He said that all of his work was about freedom, about “Not allowing anyone to set boundaries, cutting loose the imagination, and then making the new horizons.”

It might seem crazy to make ice cream in January. But this ice cream is like a small blast of summer–warm and sweet and tart, with little crunchy deposits of pecan praline. It’s not hard to make, and it’s very easy to eat!!

Here’s a scene from Gordon Park’s film The Learning Tree, which he wrote, directed, produced and scored.

In a medium saucepan over medium-low heat, warm the milk, 1/3 cup sugar, and vanilla.

In a medium-sized bowl whisk the zest, juice, eggs, 1/3 cup sugar, cornstarch or flour and salt until frothy.

Whisking all the while, pour the milk into the eggs in a thin stream. Return the mixture to the medium-sized saucepan over low heat. Warm, stirring constantly, until it thickens enough to lightly coat the back of a spoon. Five or so minutes, I think. It shouldn’t curdle, but even if it does it will freeze smooth.

Pour into a bowl, stirring constantly. Put the bowl in a pan of cold water, whisking all the while, to cool the mixture down. Cover and chill in the fridge 5 hours to overnight.

Stir in one cup of heavy cream, and freeze according to your ice cream maker’s instructions. Add the praline pieces when the ice cream is about half frozen.

1/2 cup sugar
1/4 t lemon juice
1/4 cup water
1/2 cup toasted, coarsely ground in a food processor (you still want them to be quite piece-y)

Butter a small baking tray. Mix together the sugar, water and lemon juice in a medium-sized saucepan. Put it on medium-low heat, and warm until the sugar dissolves. Turn up the heat and cook for about ten to fifteen minutes, until the mixture is golden brown. Don’t stir at all, but you can dip a brush in warm water and brush down the sides of the pan. When it’s golden brown, take it off the heat and stir in the nuts. Spread in a thin layer on the buttered baking sheet. Leave in a cool place to set. Break into pieces with your fingers, or smash with the bottom of a glass or mug.