We woke up this morning to grey and stormy skies, torrential rains, thunder, flood warnings. Everything was dark and slaty as far as we could see; grey upon grey upon grey. I’ve always liked a day like this in the summer time, a day to stay inside, to read and write and eat chocolate. (Of course that was before the boys and the stir craziness and the cabin feverish daziness.) I’ve always seen a lot of beauty in a grey day, and this seems like a good time to finish my small series of discussions of kitchen sink films, by talking about Lonliness of the Long Distance Runner. It’s a beautiful film despite the relentless smoky greyness of the industrial landscape, despite the gloomy wintery bleakness. The film tells the story of Colin, a poor boy from Nottingham played with characteristic brilliance by Tom Courtenay. He doesn’t have a lot of options in life, he doesn’t have a lot of hope, and he takes advantage of an open window to pilfer a cash box. It’s the rain that gives him away, washing all of the money out of its hiding place in a drain pipe to collect around his feet while he’s being interrogated by a policeman. He finds himself in a boy’s reformatory, and his only relief from the drudgery and degradation is running. He runs to escape, but you feel as though he runs to figure things out, too. He finds the space to think, in the solitude, in the regular rhythm of his feet. He finds joy and solace, and he finds enough hope and self-respect to quietly take a stand against the repressive authorities and the brutally condescending public school boys he’s pitted against in a race. As he comes to understand his life and his place in the world while he runs, so do we, we share in his memories to see what brought him to this place, and we share a bleak sort of hopefulness for his future. He might be stuck in a place he doesn’t want to live, but at least he can live with himself and his decisions. 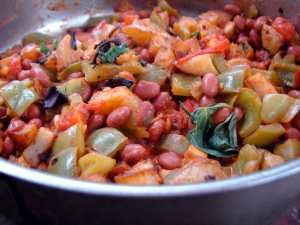 This is two two two meals in one! I made tacos with potatoes and green peppers and tomatoes from the farm, with some crispy diced tomatoes and pine nuts. They were somewhat smoky, with smoked paprika and chipotle puree. We ate them with warm tacos, basmati rice, grated cheese, and avocados mixed with cherry tomatoes. The next day I combined the leftover bean mixture with the leftover rice to make croquettes, which were almost better than the tacos themselves!

Here’s Belle and Sebastian’s The Loneliness of the Middle Distance Runner. One of my favorites!

Cut the potatoes into 1/4 inch dice. Warm a thin layer of olive oil in a large skillet. Add the potatoes, stir and fry until they’re crispy, golden, and soft inside. Ten to fifteen minutes should do it. Set them aside on a plate.

Warm more olive oil in the skillet. Add the shallot, garlic, herbs and pepper flakes. When the garlic starts to brown, add the peppers. Stir and cook for a minute or two. Add the beans, stir and cook again. Add the paprika, cinnamon, tomatoes, chipotle and about 1/2 cup of water, or enough to make it quite saucy (the amount will depend on the juiciness of your tomatoes.) Bring to a boil, reduce heat and simmer till everything is soft and warmed through. Add the butter, lime juice, and pine nuts. Stir in the crispy potatoes. Season well and serve with warm tortillas, grated sharp cheese, avocado, lettuce…whatever you like on a taco!!

Combine everything in a bowl and smash with a potato smasher until it’s mushed up, but still has some texture.

preheat the oven to 425, and generously coat a large baking sheet with olive oil. Form the bean mixture into little patties and place them on the sheet, turn them with a spatula to coat the other side with oil, and press them down slightly to flatten them.

Bake for 20 – 25 minutes until they’re crispy and golden.

Serve with smoky pesto sauce, or any sauce you like.