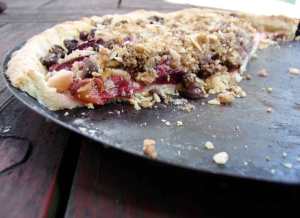 I’ve been trying to write a story. I like it so far, and I think about it a lot. I dreamed about it two nights in a row, which is a nice feeling, because when you wake up the characters seem very real and complex. At this point, you’d think I could just write it all down in a rush, and get it finished. But for some reason I haven’t done that. I know it will come out as a completely different story depending on the exact time that I sit down to finish it, and that thought is giving me pause. I don’t think it will hurt the story to marinate for a bit, anyway. As long as I can keep all the pieces in my head, and not let them all scatter like marbles from my addled mind.

ANYWAY…the subject of this week’s Sunday interactive playlist is storytelling songs. Songs that tell compelling, funny, or otherwise entertaining stories, with lively appealing characters. As ever, the list is interactive, so add them to the list yourself, or leave a comment, and I’ll try to add them through the week. 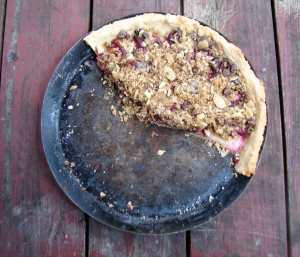 In other news, it’s yet another way to combine cherries and chocolate. This time they meet in an almond crust, in the company of sliced peaches and plums, and under a topping of sliced almonds (and chocolate chips.) I took some time to arrange the plums and peaches in a pretty pattern, but of course you couldn’t see them at all under the crisp topping! Silly. You could try putting the topping under the fruit, rendering it no longer a “topping,” but it was nice this way, and at least the peaches and plums were evenly distributed.

Here’s your interactive playlist so far.

Lightly butter a tart pan. Spread the dough into the tart pan in an even layer. Chill for about half an hour.

Preheat the oven to 375. Bake the tart shell for about ten minutes, until it just loses it’s shine.

Arrange the plum and peach slices in a pretty pattern all around the cooked shell, and put the cherries in between them.

Make the topping…combine everything in the food processor, but just process briefly once or twice, to combine. Sprinkle this over the top of the fruit.

Bake for 30 – 35 minutes, until the crust and topping look golden and the fruit seems soft.