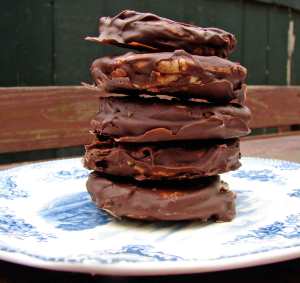 Isaac says that the worst thing about turning seven is that you’re all achy when you wake up in the morning. And I said, “just you wait till you’re forty-three and when you drop a pencil it’s not worth bending down to pick it up!” (And then I worried that I was belittling his complaint. And then I worried that he was coming down with something, because a seven-year-old shouldn’t be achy! He seems fine, though.) But I spent some time thinking about it, this morning, sitting on the couch with Clio and not getting anything done. (She’s no help, this puppy! Does she shoo me off the couch and say, “get to work!”? She does not! She makes ridiculously cute little grumbly clucky noises “ooonph, ooonph” and curls up on top of me with a big sigh so I couldn’t get up even if I wanted to!) Ah yes, I was thinking about it this morning, whilst slowly recovering from a busy weekend of I’m-too-old-to-be-a-waitress, especially in shoes that are a size too big. I’ve been feeling very stressy, lately. With stomachaches and headaches and rashes. Of course a big part of the problem is that I stress about the symptoms, I’m too aware of them when they’re there, and not grateful enough to feel better when they’re gone. Something I think about quite a bit is feeling good – a specific moment in time when you feel good and you know it. You walk down the streets of your town feeling sunny and light and happy and comfortable with yourself. You’re not hungry or tired or manic. You’re not worried about anything. The sun is shining, and it feels good to walk in a place that you know and love. It’s not a lot to ask, really – it’s more the absence of discomfort and anxiety than anything else – but it seems like such a precious, elusive feeling. It would be nice to bottle it as an elixir for the next time you have a sniffle, or you shut your finger in a door (that’s me, last night!), or you’ve got worries weighing down your heavy feet. It’s a feeling I associate with youth and springtime, but you can feel it in the winter, too, even when you’re forty-three and you don’t always feel like bending down to pick up a pencil.

I like songs about this sort of moment, and I was listening to one the other day, but I can’t remember what it is! I’ve started a short playlist of the ones I can think of, and I’d appreciate your help in adding to it! Songs about feeling good, in your neighborhood. I’ve stretched the rubric a little for some of these, but the nice thing is, listening to these songs makes you feel good!

I had a meeting with a client who asked me to make a dessert for a dinner party. (Okay, so the client was my mother and the meeting was a glass of wine in the afternoon! Before pick-up at the school! Shocking!) The party was a wine-tasting featuring Argentine wines, and the maternal client requested a dessert with coconut, raspberry and dark chocolate. So I decided to make a version of Argentine-style alfajores. These little cakes are made with a subtly-flavored coconut shortbread, sandwiched together with raspberry jam, and coated in bittersweet chocolate. They also reminded me of the empire biscuits that my scottish mother-in-law makes. I think they would make a nice sweet for a holiday party, because they’re portable – you can stuff a few in your pockets and wander from conversation-to-conversation, fully stocked!!

In a food processor or blender, process the coconut until it’s less flaky, more crumbly.

In a large bowl cream the butter and sugar together. Beat in the egg and the vanilla. Add the dry ingredients and mix until well-blended. You’ll have a stiff dough, so it might be hard to mix, but keep at it until everything is smooth and well incorporated. Wrap in foil and chill for about half an hour.

Preheat the oven to 350. Roll out the dough to be about 1/4 inch thick on a well-floured surface. Using a small juice or sherry glass, cut circles out of the dough, and move them over to a lightly buttered baking sheet. Repeat until all of the dough is gone.

Bake the cookies for about 10 minutes, until they’re just starting to turn golden on the bottom, and they’re firm to the touch. Move to cooling racks.

When they’re quite cool, spread a spoonful of raspberry jam on half of them, and top with the other half, to make little sandwiches.

Melt the chocolate in a small pan over a larger pan of boiling water, and stir in the butter. When it’s very soft and liquidy, dunk each cookie into the chocolate, using two spoons or a spoon and a knife. When they’re mostly coated, set them out on tin foil, and then chill them in the fridge until set. Once they’re set they should peel nicely off the foil.