(I promise this is the last time I’ll talk about the damn power outage – until the next time!). I live in a small city. It’s a nice community made up mostly of kind, eccentric people who have either had family here since the 19th century, or who have recently moved here from New York or Philly because they had a kid or got a dog, or just want a bit of peace. It’s built on a mid-1800s industrial scheme, with lots of brick row houses, attached or semi-attached, and small back yards that look into neighbors’ small back yards. Like many communities in which people live in close proximity, the town is quite liberal, socially and politically. We respond well to natural not-quite-disasters. Snowstorms and floods bring people out to walk the quiet streets and help neighbors shovel out or dry out. During the recent power outage, everybody gathered at city hall in the center of town to power their phones and lap tops – our only connection to the outside world! I’ve been thinking that you could write a tense, highly-wrought existential play about city hall during the ten days without power. The technology that usually keeps people apart, separate in their own rooms, with their own devices – the technology that sometimes seems to have made it impossible for people to have a coherent conversation without checking their little glowing screen – brought people together in this small building. It was first come-first serve for an outlet, and people would divide into groups – some in the bright front room, with the coffee and donated donuts and cakes, and some in the cramped, dark back corridor. You saw people you didn’t know lived in this town – people you didn’t see in your daily routine, because they don’t have children or dogs. At first the place was packed, and everyone was friendly and cheerful, everybody making the same jokes, asking the same questions. We’ve all been through it before, we’d get through it again. Everybody wanted to know the same thing – when would the power come back on, was it safe to drive out of town. The ladies that worked at city hall didn’t know. The men in official-looking suits didn’t know. The mayor wandered about, looking lost. He didn’t know. Surely somebody knew? Surely the power company knew. No, nobody knew. Nobody. And then people started to act stressed and depressed. Why was it taking so long? Why could nobody tell us when it would be fixed? But somebody would say they’d seen footage of other towns, where things were worse, and nobody could complain after that. The crowds thinned as the nights became freezing and people left town. You’d overhear the mayor admitting that they hadn’t even started work yet. Then people started to get angry. The fabric of society was breaking down. There were tales of crews of electricians from Ottowa or Ontario, but nobody saw them, there were no fleets of trucks. They were phantom linesmen, and we were told not to talk to them or they’d go away. There was a sign scrawled on white board. “Don’t yell at the linesmen.” The linesmen that nobody saw. The crowds dwindled, and the people that remained were desperate and dirty and angry. By the last day people stood on the steps of city hall screaming and angry, helpless and powerless. And the curtain falls on the dark stage, exeunt omnes. Can’t you just see it? I don’t really know what it would be about, but I’m sure I could write some sort of review that talks about alienation in the age of computerized communication and electrical lights as a symbol of our futile search for false knowledge, and you know, some kind of double entendre about “power” for the people. Oh yes. 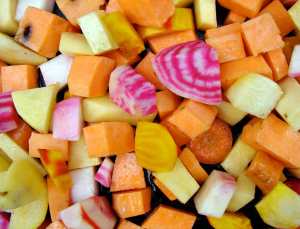 And this is exactly the kind of meal I longed to make during that time that I promise not to talk about any more! Warm, comforting, and very flavorful. We got some root veg from our CSA, and it was the prettiest root veg you’ve ever seen! Golden beets, and peppermint candy-striped beets. By the time I’d roasted and stewed them, they were quite drab, but they made up for it by being delicious. I thought I’d combine all the root veg-y flavors – sharp peppery turnips with sweet carrots and potatoes and earthy beets, with a sauce of red wine and orange juice, lemony sumac and smoky paprika, and autumnal herbs. It turned out very nice. And I made these little semolina muffins, but I tucked mozzarella inside, and when it melted and the muffins baked, it came out of the top like little volcanoes. Fun, and tasty with the stew.

Preheat the oven to 425. Combine all of the root vegetables and toss with enough olive oil to coat lightly (a few tablespoonfuls should do it.) Spread them in a single layer on a baking sheet. Roast until starting to turn brown and soft – 30 to 40 minutes. Turn with a spatula from time to time, to ensure they get browned on all sides. Turn off the heat, and leave the veg in the warm oven while you prepare the rest of the meal. (But be careful they don’t burn!)

Add the red wine and orange juice, stir, and cook for about five or ten minutes, till it’s reduced and syrupy. Add the sumac and smoked paprika, and enough water to cover everything by about half an inch. Bring to a boil, reduce heat and simmer until the vegetables are as soft as you like them, and everything is hot – ten or fifteen minutes should do it.

Add the butter and lime juice, season with salt and pepper, and serve.

olive oil for the muffin tins

combine the flour, semolina, rosemary, salt and baking soda in a medium-sized bowl. Make a well in the center and add the milk, eggs and olive oil. Stir to mix everything together.

Put a small amount of olive oil in the bottom of each muffin tin, and put the tin in the oven for about five minutes. Remove it, and carefully put a heaping tablespoonful of batter in each hole until it’s all evenly distributed. Carefully poke the cheese into the center of each muffin.

Bake for about 20 minutes, till the muffins are golden and risen, and the cheese is melted and bubbling.