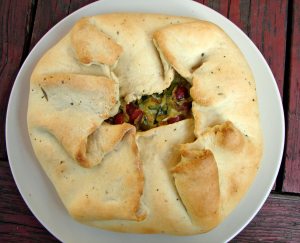 I was going on and on (and on) the other day about Konstantin Levin from Anna Karenina, and it reminded me of an unanswered question floating about in my head for a few years. In Franny and Zooey, by JD Salinger, there’s a scene in which Zooey wanders into his elder brothers’ bedroom and sees a white beaver board that they (the brothers) have filled with hand-written quotes from various sources. (At least that’s how I remember it – it’s been a while since I read it!) One of the quotes was from Anna Karenina, and since I’ve read Anna Karenina, I’ve meant to go back and see which it was. Well! We’re going through old boxes of books in our attic, and I pulled out a dusty copy of Franny and Zooey. Then I forgot about going through boxes of old stuff that was making me feel alittle queasy about time passing and trying to remember who this crazy person was who had saved all the old stuff, and sat down to read about Zooey going through old stuff that brought back his own strange memories. (I like Salinger a lot. I feel mildly embarrassed by this, and I’m not sure why. I think some people might think he’s sophomoric, but I love his evocative small details, and, of course, I love his questing quality. And that’s all I’ll say about that!)

I like the idea of a collection of quotes all in the same place. Quotes that have nothing to do with each other, but that might give each other new meanings from being next to each other. So I’m going to put a few (completely random) quotes here, just for kicks, baby! Ready, begin…

To get straight to the worst, what I’m about to offer isn’t really a short story at all but a sort of prose home movie, and those who have seen the footage have strongly advised me against nurturing any elaborate distribution plans for it.

Do not let anxiety override good judgement so that the oven door is opened unneccesarily.

As a general rule, people, even the wicked, are much more naive and simple-hearted than we suppose. And we ourselves are, too.

The most immediately noticeable paradox in Renoir’s style, and the one which almost always trips up the public, is his apparent casualness toward the very elements of the cinema which the public takes most seriously: the scenario and the action.

Such field studies are recommended rather than the amassing of large numbers of hapless captives. The animals remain little disturbed in their natural setting. Since they are marked and under study, they appeal in much the same way as one’s pets, yet do not demand care. Information obtained is more likely to be reliable that that procured under artificial conditions, and there is always the excitement of the hunt, and the anticipation of meeting an old friend.

-A field guide to Western Reptiles and Amphibians (1966)

Well, that’s it for now! I think I’ll start collecting quotes for another time, because that was my ridiculous idea of fun!!

Now…this galette. It has a yeasted crust with some basil to flavor it. And inside it has grated zucchini, toasted pumpkinseeds and red beans. You can start the crust early in the day, and the filling is actually very easy to put together. I flavored this with fresh basil and fresh marjoram, which are lovely sweetish summery flavors. And I decided to add a little ginger and a touch of cinnamon, which are sweetish wintery flavors, in my mind. I liked the combination a lot! If only because it was different from the spice/herb combinations I seem to return to again and again. And the galette was actually quite pretty – white and red and green. 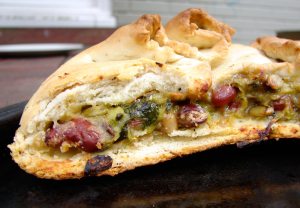 Combine the yeast, sugar, and water in a small bowl and set aside for a few minutes.

Meanwhile, combine the flour, salt, basil, and black pepper in a large bowl. Make a well in the center and add the yeast/water/olive oil/butter. Mix to combine everything. Add enough warm water to pull everything together into a workable dough. Knead for about 5 – 7 minutes, till it’s soft and elastic, and put it in a little olive oil in a large bowl, covered with a damp cloth. Set aside for about an hour and a half. Fold it over, and set it aside for about another 45 minutes.

Warm the olive oil in a large frying pan over medium heat. Add the garlic and scallions. Stir and fry till they’re softened and starting to brown. Add the zucchini. Cook, stirring often, until the pan is quite dry, and the zucchini is translucent, but still very bright green. Remove to a large bowl. Add the spices, fresh herbs, cheese, and pumpkinseeds. Season with salt and pepper.

Roll out the crust to be quite a bit larger than a 9 inch cake pan. Set it in the cake pan, hanging over the sides.

Pile the filling in the middle, and wrap the extra dough over the top, folding it into a nice patter. Leave a small hole in the middle.

preheat the oven to 425. Bake till the crust is brown and hard to the touch. About half an hour.

Let this sit for about 10 minutes to cool and set before you try to cut into it.