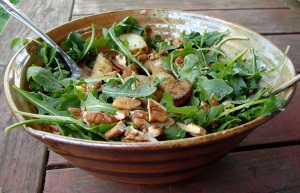 I had the strangest moment yesterday. I went to buy a loaf of bread on a balmy spring evening. A time of year and a time of day that you can feel things changing all around you. I saw a boy walking toward me on the street. He’s very tall, taller than me, and I was hit by a powerful memory of seeing him asleep in a crib ten years ago. We were living in Boston, but planned to move to this town, and his mother was showing us around the apartment that would be our home for two years – all through my first pregnancy and the first year of Malcolm’s life. I thought of how hopeful we were then, and how different. I thought of how happy we’d have been to know we’d be living here now, and to know about our boys. I imagined myself then, seeing myself walking down the street on a spring evening, feeling so at home. And I thought about my dog, who had been such a good friend to me at that time, and who had been very well-behaved when we met our future landlady, and who died a month ago. It was such an odd, slowly-passing moment, which combined the past and the present, the present as the future. It hit me hard!

That moment of tension, the feeling of things changing, is what makes spring and fall so exciting – why they make you feel alive. And now, you’re wondering, how is she going to make this about potato salad? Well, friends, this potato salad is like an edible little mix of contradicting factors that work well together. Roasted potatoes are such a cool weather food, arugula salads so warm weather. The warmth of the potatoes contrasts with the coolness of the arugula, and even wilts it slightly. The potatoes are pleasantly soft, the pecans and roasted lentils delightfully crispy. And the mellow sweetness of roasted honey and balsamic plays against the peppery sharpness of arugula and water cress. Ta da!!

Boil the potatoes in their skins till they’re soft, but still hold their shape. When they’re cool enough to handle, chop into 1/2 inch – one inch pieces. Return them to the pot, and while they’re still warm, add the olive oil, honey, balsamic, and rosemary. Stir to coat, and let them sit for a while to absorb everything. (This part can be done earlier in the day)

Turn the oven to 425. Spread the potatoes in a single layer on a baking sheet, and roast till they’re brown and crispy. If some mushy little pieces had broken off when you cut the potatoes, include those, because they’ll be nice extra crispy little bits in the end.

Meanwhile, put the arugula and watercress in a bowl. Very lightly toss it with a splash of olive oil and a splash of balsamic.

Let the potatoes cool for a few minutes, but while they’re still warm, toss them with the arugula.

Add salt and lots and lots of black pepper, and toss again.

Sprinkle the pecans and lentils over.

5 thoughts on “Honey roasted potato salad with arugula and pecans”