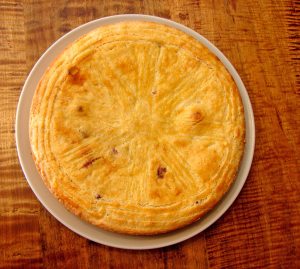 My mom recently gave me a book called Cuisine moderne et vieilles recettes. She bought it in Belgium, when she was an au pair there. I’m having such a nice time reading it! I don’t speak French at all, really, but I studied it in high school and college, so I recognize some words, and then I’ll use google translate to try and understand the rest. (“Put a bead on the mold of lacking, in the basement, before boiling the under wall?!?” Okay, I’m on it!! Sounds delicious!) My mom wrote some notes, in french, on some of the recipes. It just kills me! It’s the same handwriting she has today. I’d like to be there making the recipe with her! I admire my mom so much. She’s so brave and thoughtful and full of energy. She went from Kansas to Belgium, and she’s been more places since than I will ever visit in my life. And she travels with curiosity and empathy. She seems fearless, sometimes (but I know she’s scared of loud bangs and high heights) .

I’ve had to skip over some passages (and pictures) in the book, that talk about rabbits and livers and tongues (it’s a lot like reading Mrs. Beaton, actually!). But I was very taken by a picture of Gateau Basque. I’ve been fascinated by the idea of anything Basque since I read Bridle the Wind, by Joan Aiken. (The best children’s book author ever!) One character, a Basque girl, was fiercely, stubbornly independent, and so appealing. I love the idea of a region between Spain and France (both plenty fascinating on their own!) with its own language, its own music, its own history, and its own food. So I had to make this gateau basque – at least my poorly interpreted version of the recipe! It turned out dangerously delicious! It’s like a giant butter cookie or jam tart! It’s rich and dense and sweet. You had the choice, in the recipe, of filling it with pastry cream, but, it said, “…ou mieux, avec de la confiture de cerises (ce gateau se prépare géneralement avec de la confiture…)” So I was going for the jam, because that was better. I decided on a very Claire-y combination of quince jelly, blackcurrant jam and … Chocolate covered cherries. I was worried the whole thing would be too sweet, but Malcolm rejected his piece because it tasted bitter to him. And David said he’d like this cake for his birthday! Done and done, my love!! 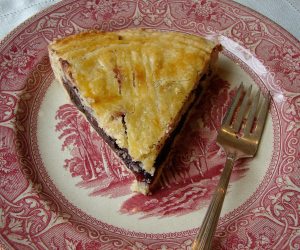 I’ve just been doing some reading about Basque music. This is amazing! Martxea Albokeagaz, by Maurizia, Leon eta Basilio & Fasio. Smokes! It sounds gaelic, arabic… wild and beautiful!! I’ll be learning more about this!

1 cup preserves of your choice (I did half quince, half black currant, but cherry would work well!)
1 T creme de cassis or rum
1 cup chocolate covered tart dried cherries (I get these at the bulk section of the grocery store, if you can’t find them, try tart cherries + chocolate chips. Or any tart dried fruit – apricots would be nice!)

Mix the flour and salt in a large bowl. Make a well in the center. Into the well, put the sugar, eggs, rum and butter. Stir the center first, to mix all the wet ingredients, then work in the flour, till you have a stiff but workable paste. I tried to use my hands to mix everything, and it got pretty messy! It’s an option, though! Put the dough in the fridge for at least an hour to set and rest.

Preheat the oven to 350. Butter and line and foil an 8 or 9 inch cake pan. (I never buy parchment paper, but I’ll break off a rectangle of foil 6 or 7 inches wide, fold it in half smoothly, and butter that into the bottom of my pan. Then put a bit of butter and flour over it. Keeps the cake from sticking!

Take 2/3 of the dough. Roll it out to be just a bit bigger than your pan. It will be very sticky – you’ll need lots of flour on the counter and your pin. You could actually just roll it to sort of the right size and then use your hands to mold it. Basically, you want the dough to line the bottom and go up the sides. But not like a pie crust – it can be quite thick, and that will be fine.

Mix your jam (or jams) with your cassis or rum. Stir to make it spreadable. Spread it into the cavity in your bottom 2/3 of dough.

Spread the chocolate covered cherries over. It should form an even layer. If you have extra – eat them!!

Roll the remaining 1/3 of dough to be about 1/2 inch thick – and wide enough to fit over your cake. Place it on top. If it seems uneven or breaks, don’t worry, you can mold it back together later.

Fold the edges of dough over to make a seem, and then, using your fingers and a flat knife, try to make the top as smooth and even as possible. (It will smooth out somewhat as it bakes, too!)

Brush the top with a beaten egg yolk, and then use a fork to make a pattern in. I’ve read that the different patterns told you what was inside. Criss cross meant pastry cream, and a Basque cross meant jam. I copied the one in Cuisine moderne et vieilles recettes, which was a circle around the edge, and a quadruple (Sextuple) cross inside. I’m not sure if looks like a Basque cross, but hopefully it signifies that we’ve got jam in there!!

Bake for 30 to 40 minutes, until the top is starting to brown, and doesn’t yield to your touch.

Let it cool before you cut into it.