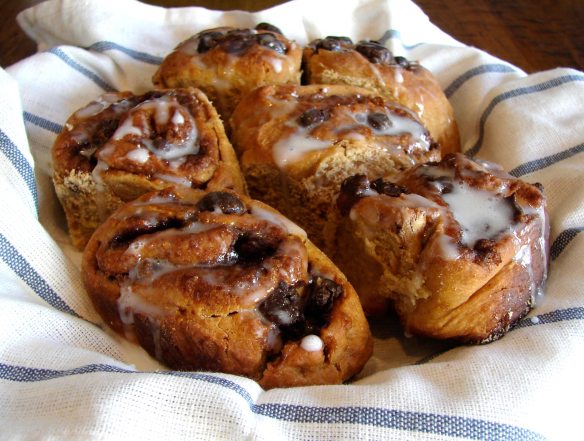 For valentine’s day dinner, we had cauliflower steaks roasted with thyme, layered with portobello steaks roasted with rosemary and balsamic, layered, as well, with chard, smoked gouda and mozzarella, and topped with porcini-sage gravy. It was a delicious and special meal, and there was none left to take a picture of. We ate it all! One of the things that made it so special, besides its ridiculous tastiness, was that it was my husband’s innovation. He thought of it!! I feel a little crazy, because I spend a lot of time thinking about new ways to cook food, and it just kills me that he sometimes does, too! We’re in it together!

Dissolve the yeast and sugar in the warm milk. Leave for 10 or 15 minutes to get foamy.

Meanwhile, in a large bowl cream the butter with the sugar and vanilla. Beat in the egg and the yeast. Add the flour, salt, baking powder and cinnamon. Add enough buttermilk to make a smooth dough. Knead for about 5 minutes. Add more flour if you need to, if it becomes too sticky.

Mix 1/2 cup brown sugar with 2 t cinnamon and half a cup of bittersweet chocolate chips.

Melt 2 T of butter and brush it over the dough. Sprinkle the cinnamon sugar mixture as evenly as possible over the butter. Sprinkle 3/4 cup chocolate covered ginger over that.

Roll up starting with the long end. Cut into 1 1/2 inch slices. Place them close together in a buttered cake pan. Any pieces of chocolate or ginger that fall out can be stuffed into the end pieces, which never seem to have as much. Let it sit for about half an hour while you preheat the oven to 375.

Bake for about 1/2 hour, till it starts to brown.