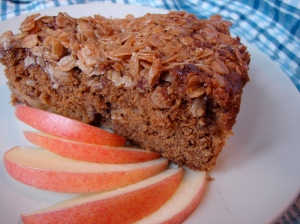 You know who could make this cake? Peter Rabbit’s mom, that’s who! I realize that this is the third time I’ve attributed a recipe to Peter Rabbit’s mom. The truth is, she’s a master chef, and she’s going to have a show on the cooking channel. It’s going to be called Fantastic Foraging!! Actually, thinking about Mrs. Rabbit’s culinary skills seems to represent the epitome of warm and comforting winter cooking, for me. Cooking with food you can find in hedgerows. Like blackberries. And there is a layer of jam between the apple cake and the flapjack topping. I should also mention that this is “flapjack” in the English sense of the word…an oaty cookie made with golden syrup, not the American sense, which is a pancake, which would make a weird topping for a cake. So, this is a spicy cake made with molasses topped with a layer of blackberry jam and then a chewy crispy layer of oats mixed with butter, golden syrup and raw sugar. Simple. Nice with coffee in the morning, nice with a dollop of vanilla-flavored whipped cream, a chunk of dark chocolate and a glass of wine after dinner.

In a large bowl cream the butter, molasses and sugar. Add the egg and vanilla and mix well.

Add all of the dry ingredients. Stir to make a thick batter. The apples will supply all the moisture that you need, and you’re going to add them…now!

Mix everything together and pour it into a prepared 8 or 9 inch cake tin. (prepared by being greased with butter and dusted with flour)

Spread the jam over the top of it.

In a small frying pan, combine the golden syrup, sugar and butter. When the sugar is melted and the butter is foamy, stir in the oats. Spread this evenly over the top of the jam.

Bake at 375 for 30- 40 minutes, until it’s browned and cripsy on top, and the center doesn’t wobble, and a knife stuck in the middle comes out clean.